What Is NAS Storage?

Network-attached storage (NAS) is a file-level (as opposed to block-level storage) computer data storage server connected to a computer network providing data access to a heterogeneous group of clients. NAS is specialized for serving files either by its hardware, software, or configuration.

It is often manufactured as a computer appliance – a purpose-built specialized computer. NAS systems are networked appliances that contain one or more storage drives, often arranged into logical, redundant storage containers or RAID. Network-attached storage removes the responsibility of file serving from other servers on the network.

They typically provide files using network file sharing protocols such as NFS, SMB, or AFP. From the mid-1990s, NAS devices began gaining popularity as a convenient method of sharing files among multiple computers.

The hard disk drives with “NAS” in their name are functionally similar to other drives. Still, they may have different firmware, vibration tolerance, or power dissipation to make them more suitable for RAID arrays, often used in NAS implementations.

For example, some NAS versions of drives support a command extension to allow extended error recovery to be disabled. A non-RAID application may be important for a disk drive to go to great lengths to successfully read a problematic storage block, even if it takes several seconds.

A single bad block on a single drive can be recovered completely via the redundancy encoded across the RAID set in an appropriately configured RAID array. Suppose a drive spends several seconds executing extensive retries.

In that case, it might cause the RAID controller to flag the drive as “down.” In contrast, if it simply replied promptly that the data block had a checksum error, the RAID controller would use the redundant data on the other drives to correct the error and continue without any problem.

Such a “NAS” SATA hard disk drive can be used as an internal PC hard drive, without any problems or adjustments needed, as it simply supports additional options and may be built to a higher quality standard (particularly if accompanied by a higher quoted MTBF figure and higher price) than a regular consumer drive. 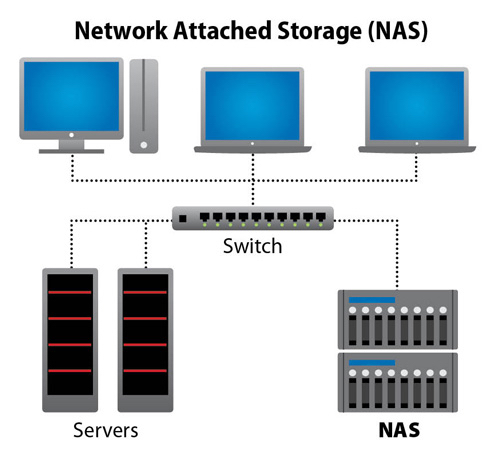 What Is The Usage Of NAS?

In this method, we put the hard drive on a server called NAS Storage and then share the network’s hard drive for other devices. Inside this server, the hard drives are called Direct Attached Storage, or DAS for short, and we are basically connecting to and servicing TCP / IP.

Storages easily and affordably provide central, local, and highly available storage for organizations’ critical files and folders. This type of storage method is the high volume sharing of the hard disk in the network and provides a volume of 1 terabyte. This type of hard drive is external and uses centralized management.

The network card can have up to 2 Concurrent Sessions. NAS is suitable for small and medium-sized organizations and workgroups and in file service and file sharing.

This method uses a special operating system such as Windows 2019 Storage Server. Extra services such as Active Directory, DHCP, and DNS are removed from Windows, and at the same time, the File Sharing feature is optimized and robust.

The method of accessing information in this method is called File-level Access, installed on Windows NAS optimized for Storeys. The difference between NAS and SAN is Block Level SAN. File-level access makes data readable and increases traffic on the LAN, which means bandwidth is taken.

This way, sharing is done, and others read the file. The common advantage of them is that centralized space management is done. This makes it slower than DAS. In this method, the performance depends on the LAN network, which is typically 2 meters.

There is a Bottleneck that is optimized in this method, and the cost is acceptable, and access may be limited.

What is an IP Address? (Types of IP Addresses & Definition)

5+1 Trustable DNS server (Definition and how to use)

How To Install Python On A VPS Server ( Windows & Linux )

What Is The Best Operating System To Create VPN Server?