What is Oracle Linux?

Today, with the practical use of the Linux operating system in a wide range of activities on desktops and servers, users have become more interested in learning about Linux distributions. You know that Linux, with its powerful infrastructure, is used for any purpose and activity and has the best performance, But when choosing an operating system for your goals, it is better to familiarize yourself with each Linux distribution’s capabilities, advantages, and disadvantages.

In this article, we will introduce you to Oracle Linux, which is one of the distributions of the Linux operating system, so that you can know more about this operating system.

Oracle Linux is one of the free and open-source Linux distributions based on RedHatEnterprise Linux that was released under the GNU General Public License (GPL) in late 2006 and is mostly used for creating data centers or clouds. Spaces

In the following, we will introduce the Oracle Linux operating system completely, and we will talk about the features of Oracle Linux. Stay with us.

What is Oracle Linux?

Oracle Linux was known initially as Oracle Enterprise Linux, as it is a free and open-source Linux distribution based on Oracle Enterprise Linux with features similar to Red Hat Enterprise and was licensed under the GNU General Public License (GPL) in late 2006. This product was launched by Larry Ellison, founder and CTO (Chief technology officer) of Oracle.

Oracle Linux, which is made by Oracle technology, is designed to run the Oracle database, develop and manage cloud applications, and help businesses manage virtualization. Oracle Linux brings customization and Oracle improvements. Also, users by using This platform can easily monitor and track the performance of the system and manage security for cloud and hybrid deployments.

Oracle Linux enables users to have software with regular updates and optimize their IT infrastructure, as well as access to source code and binaries.

Users can also perform hardware-accelerated memory encryption on this platform to secure active data stored in RAM and CPU cache.

Oracle Linux has facilitated binary code compatibility with Red Hat Enterprise Linux (RHEL). Due to this feature, developers can monitor the performance of user programs and operating system performance through the tracing framework and DTrace.

Because of its compatibility with SaaS software, Oracle Linux is compatible with most business information systems and operating systems such as Windows, Mac OS, and Linux. It also supports most browsers such as Chrome, Firefox, etc.

Oracle Linux provides an API to integrate with IT applications. This integration enables the exchange of data and the synchronization of files between several computer programs through an extension, a plug-in, or an API (application programming interface/programming interface) in a database. Therefore, this operating system has made it possible to connect Oracle Linux software to at least 2 software platforms to increase productivity and make data exchange between applications easier.

Oracle Linux offers the latest innovations, tools, and features you can use in cloud-based, virtual, and even traditional environments for various activities. This operating system has a unique performance by providing reliability, scalability, and flexibility in implementing programs and organizational systems.

This operating system supports x86 architecture in all engineering systems, and the interesting thing is that Oracle Linux is available to users to install, use, distribute and update for free.

Besides its cost-effectiveness and flexibility, Oracle Linux has high security, stability, enterprise-level performance, and serviceability (RAS).

But the main distinguishing feature of this operating system, especially in database transactions, can be seen in its features in the platform’s depth and solution stack, which owes this advantage to the high stability of the Unbreakable Enterprise Kernel and cooperation with industries.

In which fields and jobs is the most used Oracle Linux operating system?

Oracle Linux is a server and desktop-compatible operating system that is more suitable for enterprise purposes and professionals.

This operating system is recommended for IT-DSI and sales-commercial jobs and is mostly used by ETI companies, SMEs, and companies operating in the service sector.

The main difference between Oracle Linux and RHEL is in their kernel. The kernel in Oracle Linux is an optimized and customized kernel called Unbreakable Enterprise Kernel (UEK), which is special and customized to run Oracle software. . UEK is based on the main Linux kernel, and unlike the main kernel, it has the ability to fix possible problems and security improvements.

Another difference between RHEL and Oracle is in their package repository. Oracle Linux uses Oracle Public Yum Server, which is a collection of Oracle software, Oracle database, UEK core, and applications. The advantages of Oracle Public Yum Server include updates by providing security patches and fixing bugs, but RHEL has a RedHat Network (RHN) that requires a subscription to access the latest security updates.

Another difference is that Oracle Linux is free to use and can be redistributed and modified under the GNU General Public License (GPLv2). It should also be noted that this operating system is offered in two 32-bit and 64-bit versions.

Reasons to use Oracle Linux

This operating system will be the choice of users due to its features and differences from other Linux distributions, which we will mention below for some of the main reasons: 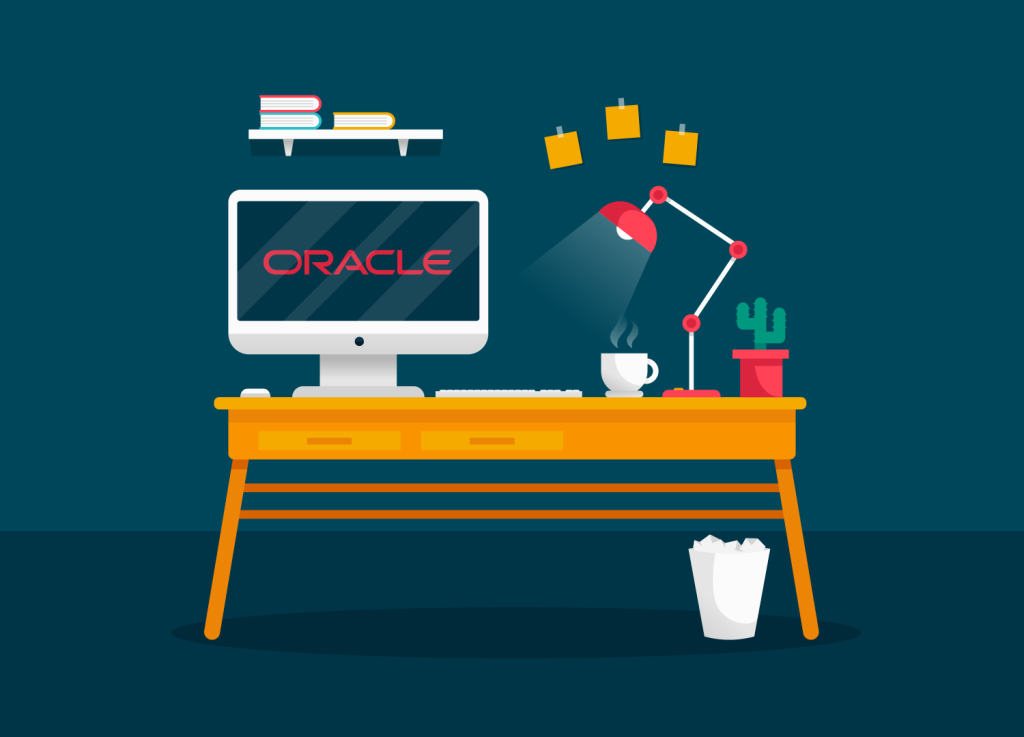 Of course, Oracle Linux also offers features that have intensified the competitive environment between commercial Linux distributions such as CentOS, and it has attracted a wide range of users, especially for business purposes. You know that CentOS is a distribution similar to Red Hat Enterprise; of course, CentOS, with its history and reputation, is always trying to maintain its position among users and has maintained its popularity; if you are eager to learn more about CentOS operating system, do not neglect to read our article.

In the following, we would like to introduce you to the amazing capabilities of Oracle Linux to understand better why users use this operating system.

To improve and strengthen the performance of the database, a team of oracle Linux engineers have been continuously working; for example, this team has defined a new policy, Reliable Datagram Sockets (RDS), which is a connectionless protocol with low latency to reliably deliver datagrams to thousands of ports. They were able to improve the performance of the database and reduce the dispersion.

Oracle provided the RDS code to the open-source software community, which is now part of the Linux kernel. Oracle engineers are trying to simplify the database code, this has a positive role in increasing the efficiency of database transactions.

Multicore X86 processing and the advanced architecture of this system to speed up and strengthen performance are other actions of the Oracle Linux operating system. The history of Linux shows that this operating system primarily focuses on information processing in the state of High-Performance Computing for various applications

Offering InfiniBand, low latency, and scalability, Oracle Linux is used as an integrated switching of HPC (High-Performance Computing) applications and is currently considered a common technology in organizations’ data centers.

Another criterion for Oracle Database applications to optimize performance on X86 servers with Oracle Linux operating system is the collaboration with Intel, which allows the use of Intel SIMD and AVX capabilities and NUMA (Non-uniform memory access) scalability instructions to Oracle Database.

Oracle Linux with UEK (Unbreakable Enterprise Kernel) includes extensive scalability and performance improvements for process scheduling, memory management, file systems, and network packages. It is designed to perform better and faster on the leading x86 system to configure features such as having multiple CPU cores and high amounts of memory.

Resource management is one of the admirable features of Oracle Linux, which is done using a feature called control groups, introduced in Linux version 6; it is done with the purpose of allocating system resources such as memory, CPU, storage, and bandwidth for specific processes such as Oracle Database instances for providing needed resources of the strategical applications and prevent the use of resources for unnecessary purposes.

The “cgroups” feature stands out well in large oracle databases because a specific CPU is considered for Performancing instance caging and binding assignment of each instance. This feature in the NUMA architecture (Non-uniform memory access) is due to the way this architecture is connected, which allows each processor to access local memory and, in addition, non-local memory. Thus it causes improving performance and Increases the speed of memory access.

Oracle Linux focuses on increasing stability and high availability through many tools. Also, Oracle Clusterware is set as the base for Oracle Linux, which is supported at no additional cost.

Oracle Clusterware is software that runs several Oracle Linux servers in the form of a system and provides redundancy when faced with software and hardware problems.

Apart from its focus on database applications, Oracle Linux has also provided advanced features in securing data and access.

To facilitate the process of moving from a physical environment to a virtual environment, the two teams of Oracle VM and Oracle Linux worked together to ensure compatibility.

Oracle Linux also provides a solution for Administrator productivity by providing management tools. The Oracle Enterprise Manager tool is one of the web-based tools embedded in Oracle Linux to manage the performance of applications and the availability of Oracle’s systems, including Oracle Linux applications, databases, and virtual servers.

By connecting with managers and industries, Oracle helps make IT activities faster and more cost-effective so you can equip Manpower, customize training and solutions, and improve Implemented programs.

The team of Oracle engineers has collaborated with many groups to develop effective solutions and tools for implementing and managing Oracle Database on Oracle Linux. For example, Oracle engineers have consulted with their software partners to certify programs and also cooperated with their hardware partners to control systems, confirm drivers, and improve the performance of Oracle Database on Oracle Linux.

According to the results of the TPC-C (Transaction Processing Performance Council) test, which was conducted on Oracle and non-Oracle hardware, it was found that Oracle Linux is superior in terms of performance and price/performance compared to its competitors. Also, Oracle’s X2-8 SUN server with Oracle Linux operating system was the fastest online processing (OLTP) on the X86 system with a difference of 5 million tpmC (A Criterion of TPC measurement speed).

What are the alternatives to Oracle Linux operating system?

If we want to name a few examples of operating systems to replace Oracle Linux, they include the following:

Although it is impossible to comment with complete certainty, this operating system focuses on improving security, provides security features and patches, and fixes bugs with regular updates. It also tries to increase security with the help of a firewall, data encryption mechanism, and automatic data backup.

What is the feature of Oracle Linux Unbreakable Kernel (UEK)?

UEK also supports VMWare and is compatible with most applications, unlike the Linux kernel, which does not support some common applications.

How does Oracle make money from Oracle Linux?

Although Oracle Linux is free, but to get additional benefits such as the ability to raise SR, benefit from 12c and Ops Center for Linux management, support for XFS, use Ksplice - for crash updates, support for all virtual machines or docker images based on Oracle Linux and dtrace that you pay a support subscription.

With its stability, security, efficiency, and compatibility, Oracle Linux is an excellent choice for running Oracle software and administrative and organizational purposes.

In this article, we mentioned the key features and reasons for users to use Oracle Linux and introduced Oracle Linux to you completely. Share it with us if you have experience using the Oracle Linux operating system.

Thank you for accompanying us to the end of the article.

What is SoftEther VPN Protocol?

VDS vs VPS: Differences between VDS and VPS