What is Kali Linux? (Definition and usage)

Kali Linux is developed and supported by the data training company Offensive Security. Advanced penetration testing and security audits are the primary goals of this Debian-based Linux distribution. You may wonder what Debian’s standard is. To answer your question, Debian is a complete command-line system that does not include an x11 or GUI environment. A primary server is all it is. You can only utilize a landline for command line training unless you have a landline. An ethical hacker can wage war using the array of tools he has at his disposal, thanks to the slew of pre-installed devices in this OS.

Why does Kali Linux get used by hackers?

While Backtrack featured several tools that all served the same goal and became overburdened, Kali Linux claims to be a more polished replacement focusing on testing instead of Backtrack’s slew of redundant utilities. Ethical hacking on Kali Linux is made easier by this.

Deavon Kearns and Mati Aharoni are the primary creators of Kali Linux. Backtrack another Linux distribution for penetration testing was reworked into this distribution. Most of Kali’s code comes from the Debian repositories. Hence its development follows the Debian guidelines. A small group of experienced developers began working on the project in the early days of March 2012. Only a few developers were authorized to commit packages in a secure environment. In 2013, the first version of Kali Linux was made available to the public. There have been a lot of significant modifications to Kali Linux since that time. Offensive Security is responsible for developing these updates.

The purpose of Kali Linux

Kali Linux is the best choice for advanced penetration testing and security auditing. Penetration Testing, Computer Forensics, and Reverse Engineering are just a few of the many information security activities that may be accomplished with Kali.

Is it illegal to use the Kali Linux operating system?

By itself, Kali Linux is not considered illegal. The OS is merely a software component. If someone utilizes it only as a means of hacking, they are breaking the law. Installing it for educational or teaching purposes, or strengthening your software or network, is allowed, as is installing any licensed and freely available operating system.

Why should we use Kali Linux? 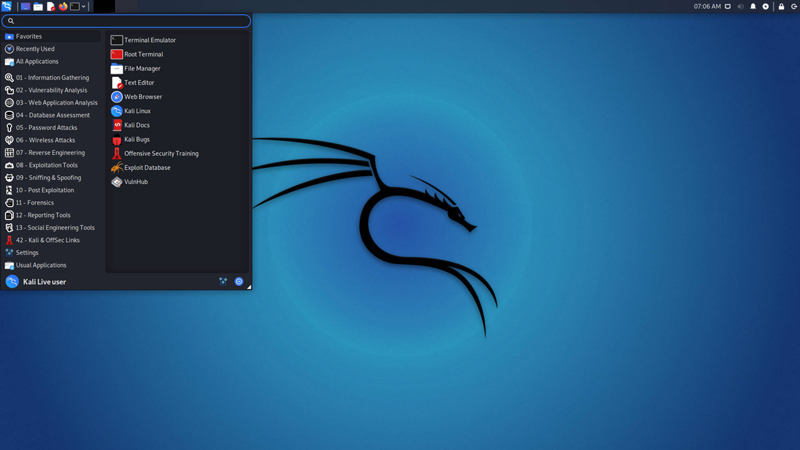 For a variety of reasons, Kali Linux should be used. Let’s have a look at a few examples:

There are many beneficial tools available in Kali Linux, as described earlier. The software that comes pre-installed on Kali Linux systems is listed below. Obviously, this list isn’t exhaustive and can be supplemented with more information if necessary, depending on the prerequisites and decisions of the reader.

An open-source network scanner developed by Gordon Lyon, Nmap is known as Nmap. For the most part, it’s used to find hosts and services on a system by transmitting and analyzing packets over time. It has various features and benefits, such as identifying the operating system of a computer network.

THC Hydra is one of the most effective tools available for brute-forcing a remote authentication service. For example, it can be used to launch a slew of dictionary attacks against telnet, FTP, HTTP, SMB, and other protocols. It is a multi-threaded login cracker that can attack a wide range of conventions. Like other utilities in Kali Linux, this one is fast and versatile.

Aircrack-ng: To manipulate and attack WiFi networks, it is not just one tool but a collection of tools. NIC monitor mode is enabled as a result of this setting. The ability to capture network packets is available once it is activated. 802.11 wireless LANs are supported by a detector, packet sniffer, WEP, and WPA/WPA2-PSK cracker, and an analysis tool Monitoring mode can be enabled on any network interface controller. Its primary goal is to identify weak points in the WiFi security system. Monitoring, attacking, testing, and finally cracking are the four stages of the process.

A proprietary vulnerability scanner created and developed by Tenable Nessus is utilized during penetration testing sessions. Use it to check your computer systems for security flaws via a remote scanning tool. It does not, however, do so on its own. Pernicious programmers may exploit these vulnerabilities to gain access to any PC affiliated with your company if it is equipped to detect them. After running more than 1200 tests and displaying alarms where security fixes are needed, it provides structures for easy cross-linking between them.

Protocol analyzers like Wireshark are very popular on Linux, and it’s easy to see why. It’s a packet analyzer that’s available for free and open source. If you’re searching for a way to keep tabs on the minute aspects of your network, this is the tool for you. With the help of online scanning software, you can quickly identify potential dangers, problems, and vulnerabilities on the internet. All major operating systems are supported and up to 2000 different network protocols. It’s compatible with all of Kali Linux’s standard commands.

It may be challenging for you to buy Kali Linux Server, as most providers do not sell Kali Linux due to illegal use. But if you need a Linux VPS with common distributions, most providers can provide you with a service.

Initially, the project was referred to as Whoppix or WhiteHat Knoppix. According to the name, the operating system is based on Knoppix. There were several Whoppix versions, spanning from 2.0 up to v2.7.

WHAX was born due to this (or the longhand, WhiteHat Slax). Since Slax had replaced Knoppix, the name had to be altered. A nod to the fact that it would go on from Whoppix is why WHAX started at v3.

While Auditor Security Collection (commonly shortened to just Auditor) was being developed simultaneously as BackTrack, efforts were pooled (together with WHAX) to create the latter. From version 1 through version 3, BackTrack was based on Slackware, but from version 4 onward, it was Ubuntu.

Kali Linux was created in 2013 due to all of this, following the release of BackTrack. When Kali became a rolling operating system, Debian stable was used as the engine under the hood, but Kali later switched to Debian testing.

To conclude this article, we’ve looked at Kali Linux uses and tools in many learning and accessibility opportunities this open-source, free platform gives us. If you’re interested in learning ethical hacking, you’ll want to utilize Kali Linux because it offers many customization options and beneficial tools.