Do you want your storage tool to be cheap and bulky or fast and secure? Here, we will choose between an SSD and an HDD and their performance on VPS hosting.

Until a few years ago, Dedicated Server or VPS hosting buyers had a minimal choice in storage equipment for their services. The current world of storage memory is a combination of two different technologies; On one side of the competition are solid-state drives, or SSDs, as agile and modern newcomers.

On the other, we see an old-fashioned hard drive called a hard disk drive. But the important thing is to choose between the two. For detailed information on the mechanism of these storage devices and their types, we recommend that you first read the article “Hard disk drive and SSD storage guide”; In the following article, we will discuss the most prominent points for choosing SSD and HDD and explain the advantages and disadvantages of each.

Short About SSD And HDD

Conventional rotating hard drives are a permanent storage tool for computers. Permanent storage means that the stored information is not lost when the power is cut off. The hard disk drive is a metal platter with a magnetic cover. Its job is to keep your favorite data; Whether it’s a century-old weather report or a high-quality copy of your favorite Lord of the Rings trilogy or music, the hard drive does it for you. While the plotter is spinning, the read/write head on the hard disk will access the data you want with one arm.

These memories are based on disk motion and have been around for decades, but they still hold a significant storage market sharet. Current hard drives are available in two main categories, external and internal, and in the standard sizes of 2.5 inches (for laptops) and 3.5 inches for desktops. 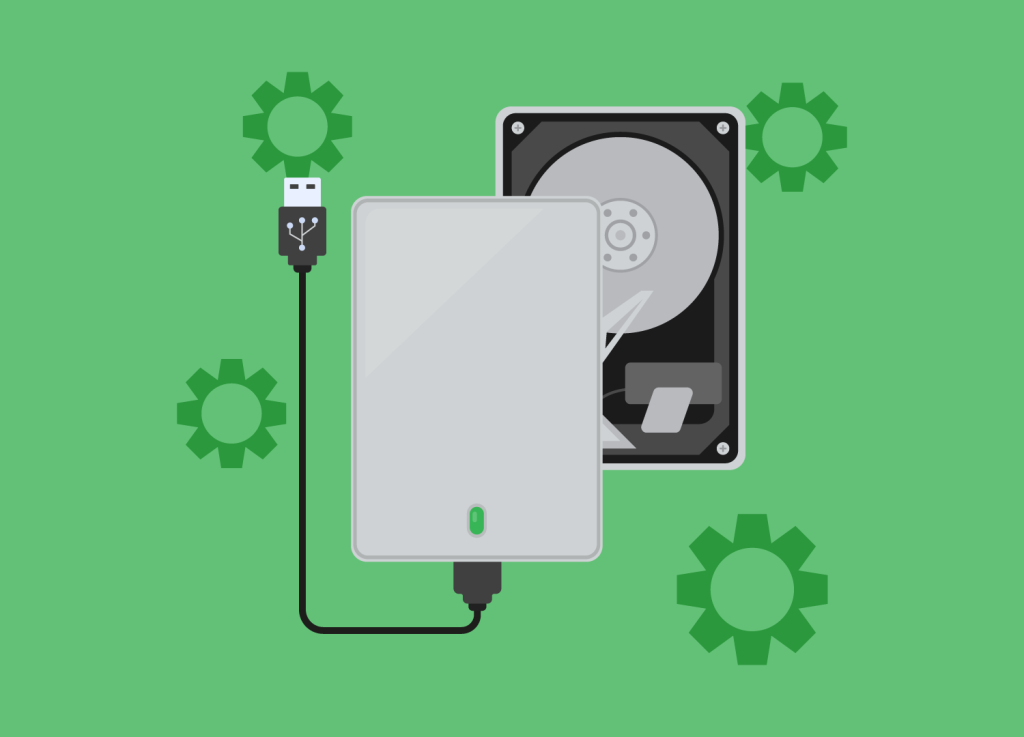 SSD Or HDD? It is worth noting that in this article, we are talking about the main storage tools of the system. But almost all of the above can also be extended to external drives. External storage is generally more commonly used for archival and data storage applications, so a large portion of the market is still available for disk-based storage, but external SSDs have also found their way into the market and can be used for more professional purposes.

Fortunately, nowadays, you can buy VPS hosting services from all providers!

Hard disks with capacities of up to 8 and 12 terabytes are available in the market for ordinary users; Of course, these capabilities are commonly used for servers. Hard disks are generally used in high capacities, so hard disks with a volume of fewer than 500 GB are almost rare in the market. If you want to use memory to store low-usage files and need high capacity, your first choice would be a hard drive.

Buying an SSD with a capacity of more than one terabyte will cost a lot, and hard drives are generally the most sensible choice for capacities at this level. A combination of hard disk for storing secondary data and SSD for software and operating system installation is the best way to use memory capacity; Even if you are a professional user, such a combination will be helpful for you and will reduce your costs.

Difference Between HDD And SSD VPS

There are many differences between SSD and HDD; From the speed of data loading to the speed of uptime and site loading…

Performance?! In terms of performance, an SSD can do all the hard drive’s work. But instead of storing data on a magnetic disk, it is stored on interconnected flash drives. These chips can be connected directly to the motherboard (such as small, portable laptops and dedicated servers) via the PCI Express port (in some professional workstations and dedicated Servers) or in neat boxes using existing ports to the desktop, laptop system, or Dedicated Servers.

SSDs belong to the world of chips because of their use and will be their future; new technologies in these memories have overcome many of the limitations of conventional hard drives.

High-end laptops, PCs, Servers, and newer Ultrabooks typically use SSDs; On the other hand, much older systems can use SSDs thanks to the SATA port. There are generally two types of 2.5-inch memory and M.2 memory for the average user; The first type is less expensive and can be installed on almost all desktop computers and VPS hosting services, but the M.2s are seen as leaders in speed and technology only in high-end Systems with new motherboards; The advantages of M.2 memory over SATA SSDs are their higher price and, of course, better performance. 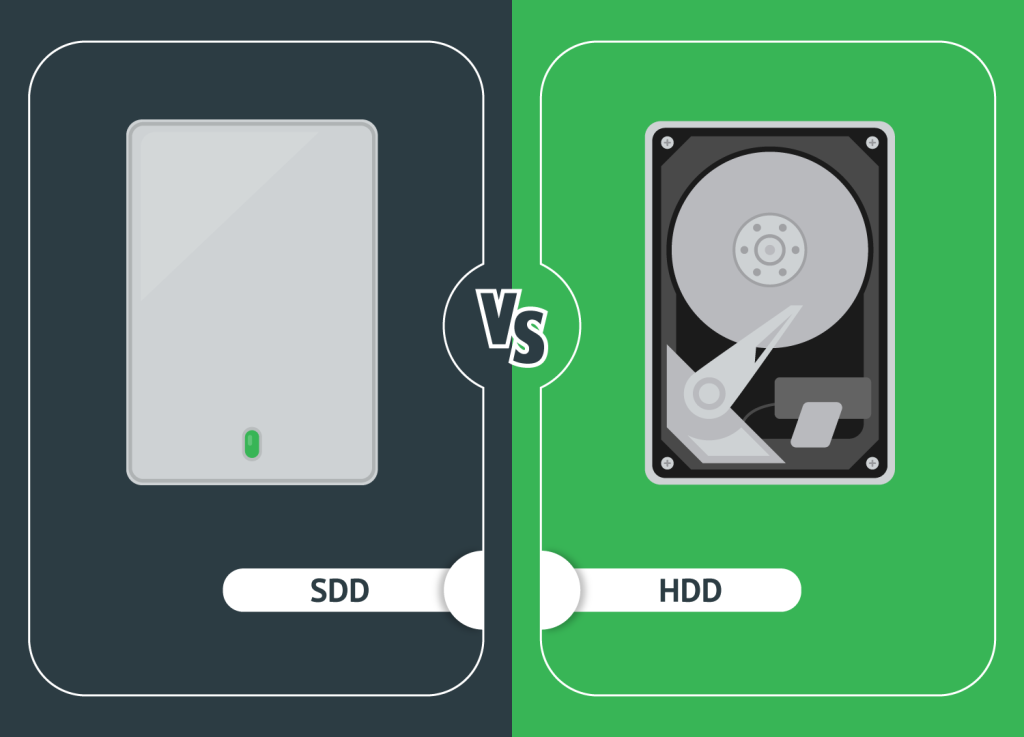 SSD and HDD do the same thing; They boot your system and save your programs and files. But each of these two storage tools has its own characteristics. In the following, we will examine the differences and explain why choosing one of them.

SSDs cost more per dollar per gigabyte. A 1 TB internal hard drive costs about $ 40 to $ 50, While an SSD with a similar capacity is priced at around $ 160 to $ 180 (SATA models); Generally, the cost of buying M.2 models is twice that of SATA SSD models. Hard disks will cost you less because they use older, more established technology, so these memories are still your priority if you are looking for cheap storage memory.

SSDs are more expensive than hard drives due to their newer technology, but advances in manufacturing methods such as 3D flash drives and increased production volumes will shape a good future for these memories; Fortunately, in recent years the price of these memories has been declining and this trend is still going on.

If cost is your top priority, SSDs are not an ideal choice, especially at high capacities; In this case, buying a low-capacity SSD and using it in combination with a high-capacity HDD is our best solution and recommendation. If there is no financial limit to buying memory and looking for professional uses, it makes sense to buy SSDs even at high capacities. As a result of buying a hard drive, buying an SSD with a SATA interface, and buying an M.2 SSD will deduct the least and most money from your account, respectively.

Although SSDs offered to users are up to 4 terabytes in size, memories of this size are very expensive; The usual capacity used is 128 to 512 GB as the main storage drive. A 128 GB memory for Windows applications and nearly 50 GB of free space; In addition to the above, 256 GB of memory will allow you to install an average of 3 modern games.

The capacity required for multimedia users is more than 1 to 4 terabytes in high-end systems, so these users should only go to SSDs for the information they deal with every day and enjoy its high speed; Cloud storage tools may be suitable for storing and sharing files between your phone, tablet, and PC; But buying personal storage tools is less expensive and you only need to buy it once.

In terms of quick access to information, SSDs perform much better because of their chip-like nature; Unlike hard disks, where the physical limitations of moving the head and recording data in different parts cause data to be delayed, SSDs have high-speed access to data and do not show a significant difference in random read speed tests. The speed of data access in SSDs is also stable to hard disks and there are no severe fluctuations in it.

SSDs are up to 30% faster than HDD models in terms of file opening speed, and they also run applications faster. A system with a hard drive typically takes 30 to 40 seconds to start or boot Windows, while SSDs reduce this time to 10 to 15 seconds.

Capacity and price are what hard drives are all about. But if factors such as speed, stability, weight and dimensions, noise, and the absence of fragmentation are important to you, go for an SSD. If price and capacity are not important to you, SSD is the absolute winner.

Fortunately, the combination of using this type of memory has become very popular in recent years, and VPS Hosting sellers provide it too; If you love high-speed SSDs, you can easily get a lot of new life on your VPS hosting service by buying a low-capacity memory of this type and using it along with your hard drive.

In terms of lifespan, SSDs have a limited number of reading, also write times per cell; But this limitation is so long that you will think about buying new memories. If you are concerned about this, you can check the health of the SSD using SMART information (the same can be done for the hard drive); If your drive is nearing the end of its life, you can use this information to find out. Because the hard drive has a mechanical part, it will eventually fail after a lot of use, while any severe shock or even shaking while working can end its life.