How to Install and Use Screen in Linux

Linux VPS is mostly managed through the terminal environment. All Linux VPS administrators are looking for solutions for better productivity and efficiency. Installing and using Screen in Linux has recently become common among Linux VPS developers and Sysadmin.

Screen in Linux is a tool that allows the creation of several virtual shell environments in a current shell. That is, you can perform different tasks by creating several separate terminal instances in one terminal at the same time while interrupting a work session does not affect the performance of other sessions and terminal instances.

This tool plays an important role in improving the management of Linux VPS. If you are interested in knowing more about Screen in Linux, then we will introduce you to what Screen is and how it works, and we will even teach you how to install and use Screen in Linux. Therefore, reading this article can make you benefit from the Screen tool. Follow us to the end of the article.

The screen allows the Linux server manager to run multiple virtual terminals (multiple windows) in one session, and when each session is terminated, other work sessions are not affected. Therefore, by using Screen, you can benefit from more advanced facilities in the terminal environment and simultaneously run, stop and save different work sessions without interfering with each other’s performance. One of the great advantages of Screen for Linux server administrators is that it provides the possibility to save changes in sessions and at any time you can continue from where you left off the last time.

Now that you are fully familiar with ScreenLinux, it’s time to use this wonderful Linux feature to perform tasks and improve your performance.

Prerequisite for installing and using Screen in Linux

Installing and using Screen in Linux

As you know, Linux has a large family and some Linux distributions may have benefited from the Screen utility by default; For this reason, it is better to first make sure that the Linux operating system you are running supports the Screen tool by default or not.

Therefore, you must first connect to the Linux server through the SSH command and enter the command line environment:

Step 2: Checking if Screen is pre-installed on the Linux operating system

Then check if the Screen package is already installed in the Linux operating system by running the following command in the command line:

To install and use Screen on RedHat derivatives, CentOS, Alma Linux, Fedora, and Rocky Linux (To learn more about popular Linux operating systems, you can read our articles in the Knowledge section of the Opera VPS website), run the following command:

Run the following command to install Screen on Manjaro:

You can install Screen on Gentoo by typing the following command:

If you want to install Screen on OpenSUSE, enter the following command:

If your user account does not have sudo privileges, you must have root privileges to install Screen on a Linux operating system:

So far in the article, you have successfully installed the Screen package on your Linux operating system, now it’s time to use the screen features for better performance and run Screen and start a screen session. To launch Screen, you must enter the following command in the command line:

In the output of the command that it receives for the initial setup of the screen, there is a licensing agreement that you must press the Space button to continue the steps.

On the new screen, you are asked to press the Space button again to create a new screen session.

As a result, you enter an environment that is similar to the Linux terminal environment.

UsingCtrl + a along with other keys which are the most common Screen keystrokes, you can manage Screen shells. 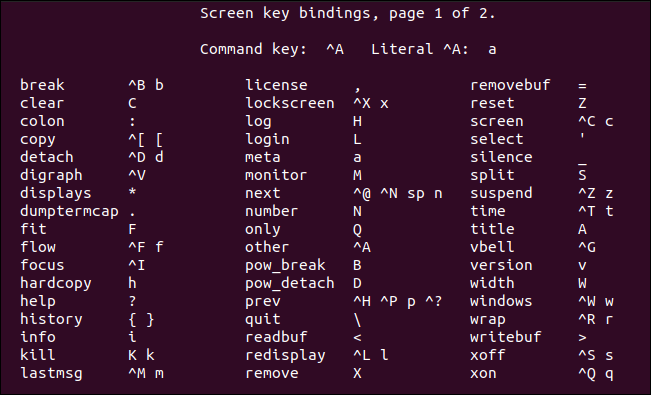 This command guides you on how to use Screen. In addition to the above command, the following command can also be used as a guide:

The output of this command also provides shortcut keys and special parameters for different purposes using Screen. To exit the help page, press Enter or Spacebar.

How to manage sessions in Screen Linux

By starting a session in Screen, you can choose between two windows, one that may cover several windows. The Screen environment is the same as the terminal environment where you can use certain commands and parameters for different purposes.

We have compiled a list of common Screen commands and shortcuts in this section so that you can use them to get better performance from Screen and better manage Screen windows in Linux.

Note: The uppercase and lowercase letters of the shortcut keys are important during the execution of the commands. Also, remember that these commands are executed in Screen to multiplex the terminal and their main syntax is in the following format:

the naming of sessions on screen plays an effective role in improving the management, identification, and tracking of sessions. Therefore, define a descriptive name for each running session in Screen.

To create and name the session in Screen, the main command is in the following format:

Note: It is better to use descriptive attributes to name sessions so that they are easier to identify.

Another feature of Screen is to Detaching windows and leave them in the background so that server administrators can easily access the desired window. Use the following key to Detach from the screen and exit the screen session:

By executing the above command, even though the program is running, the screen session is exited on the screen and the desired process is left from the interface. In other words, a window is minimized in the graphical operating system.

By executing the above command, you can retrieve the session ID and version in a list and rejoin the desired session.

For example, to restore the screen session, 2898. upgrade, enter the following command:

To edit, you need to read the file. So enter the following command:

In the output, you can change the settings by removing the (#) sign from the beginning of the lines.

By running the following command, you can change the default screen according to your needs:

Locking and setting passwords to the screen

To lock the screen, use the following parameter:

By default, you need to enter the Linux password to unlock the screen.

To improve session security, you can set a password for each screen session and enter a specific password each time you connect to the session. Use the following command to create a password-protected screen:

In addition to the help command, the following command will guide you more on how to use Screen:

What is the use of installing a screen?

By running the Screen terminal program in Linux, Create multiple windows and several processes (usually interactive shells) can be executed simultaneously in one window. This advantage is created with the help of Screen in Linux, which has a great effect on improving the management of your processes and performance.

How to find out that Screen is installed on our Linux operating system?

By running the following command:

Check if Screen is installed on your Linux operating system. If the version of the Screen package is displayed in the output, make sure to install Screen on your operating system. Also by pressing Ctrl+a and then Ctrl+t, you can Check if you are in the Screen session. The display of the hostname and time indicates that you are in the screen session.

Screen in Linux provides useful functionality in managing projects; through special keys and Screen commands, you can customize the Screen terminal environment. also you can Run multiple Screen windows in one window and easily switch between sessions and start and save and resume multiple sessions without affecting each other.

In this article, we taught how to install Screen in various popular Linux operating systems and provide practical information on how to use Screen for various purposes.

We hope that with the training that we provided, you will be able to master how to use the screen. If you encounter any questions or problems in any part of our training, please let us know in the comments section so that we can respond.

Thank you for reading our article.