Need to protect your data in the case of a drive failure? You need to know What is RAID. It is short for Redundant Array of Inexpensive Disks that helps you to store the same data in different places on multiple hard disks or solid-state. As a technique to increase performance, data redundancy, or both, RAID allows you to use a combination of multiple disks instead of using a single disk. Describing computer storage systems is possible with the help of RAID storage, and it is usually used to increase data reliability and improve input and output performance. In this article, you will learn about RAID in simple words to find What Types of RAID you should use.

To buy your own VPS, refer to our cheap, fast, and reliable plans and purchase what you exactly consider and enjoy 24/7 support with one click.

What is RAID and How it Works

In 1987, David Patterson, Garth A. Gibson, and Randy Katz coined the term RAID as a data storage virtualization technology at the University of California. When a user wishes to combine multiple physical disk drive components into one or more logical units, RAID is there to improve the performance and redundancy of data. Data redundancy increases disk reliability since it causes extra space. So, if you face disk failure, you will be able to retrieve your considered data if it was backed up onto another disk. To avoid losing your entire data when a single disk is lost, you are recommended to spread the data across multiple disks using the RAID technique. It is implemented on servers but if your computer apps require high storage capacities and data transfer speed like video and audio edits, RAID is an ideal solution for you. Implementation of RAID is hardware-based and software RAID.

Your data is valuable! HHDs and SSDs have their own cons and chance of failures like speed, price, and performance weaknesses, and come with some physical limitations. By the way, using a hardware RAID card for SSD volumes is not advised because the additional cache is not necessary because of the speed of the SSDs themselves. Depending on the type of RAID you use, the mentioned issues could be solved. So, to protect your data from drive failure, you need to implement some methods.  To drive into what is RAID exactly, reading the pros and cons of it, could be helpful.

Implementation of RAID is Hardware-based and Software RAID. Both software RAID and hardware RAID are available for installation. Let’s go into detail.

A separate controller needs to be placed in the server for hardware-based RAID. Based on the RAID configuration you want to have, Steadfast staff would be delighted to give you advice on which hardware RAID support is optimal for you. Without any intervention from the system itself, a hardware-based RAID card manages the RAID array(s) and provides logical discs to the system. Furthermore, hardware RAID can offer the system a variety of RAID configurations simultaneously. For the large storage array, a RAID-5 array is also provided in addition to a RAID-1 array for the boot and application drive.

All of Steadfast’s dedicated servers come with the software RAID option as a standard feature. This implies that software RAID 1 is FREE and is strongly suggested if you’re using local storage on a PC. It is strongly advised that all the drives in a RAID array be the same kind and size. RAID that is managed through software will make use of some of the system’s processing power. When using ordinary HDDs and trying to enhance system performance, such as with a RAID 5 or 6 configurations, it is advisable to use a hardware-based RAID card.

To provide fault tolerance and increase the storage capacity of the system, RAID uses multiple disks. Find its key features below.

While using RAID storage, you might face losing data since it is not a perfect technology.

Who Should Use RAID

If your programs are waiting on the disc to complete tasks, you may benefit from RAID if you are experiencing disc IO problems. By allowing you to read and write data from numerous drives instead of just one, choosing RAID will provide you with more throughput. Furthermore, if you choose hardware RAID, the hardware RAID card will come with extra memory that may be used as a cache, easing the load on the physical hardware and boosting performance in general.

Backups can protect you from disastrous data loss. However, recovering huge volumes of data, such as when a disc fails, might take several hours to complete. Those backups can be many hours or days old, costing you any data that has been added, deleted, or modified since the last backup. With RAID, you can withstand the failure of one or more discs without experiencing any downtime or data loss.

Stay with us to get familiar with different types of RAID to even find which level is suitable for you depending on your needs.

Raid levels each have unique characteristics, fault tolerance, capacity, and performance. To be fault-tolerant means to be able to withstand one or more-disc failures. Performance displays the difference in read and writes speeds between the complete array and a single disc. The quantity of user data that can be written to the array determines the array’s capacity.

To go through the main question of this guide and find what Types of RAID you should use, you first need to know what RAID storage techniques are. Here are the main data storage methods in the array.

Depending on the application, there is usually a trade-off between fault tolerance and performance because different levels have different sorts of redundancy. Let’s see how RAID arrays employ the techniques to a single logical drive in the operating system. 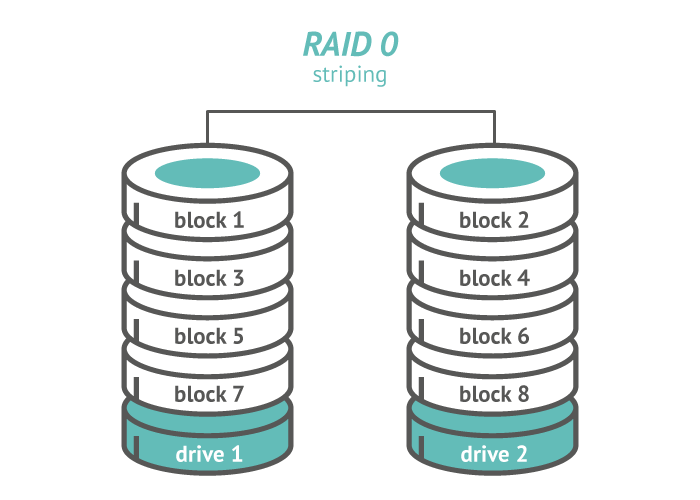 2. RAID 1: (Also called Mirroring and duplexing) RAID 1 offers exceptional write speed and read speed that is on par with a single disc. Data is copied to the backup drive in RAID 1 when a disc fails because the technology is so straightforward. 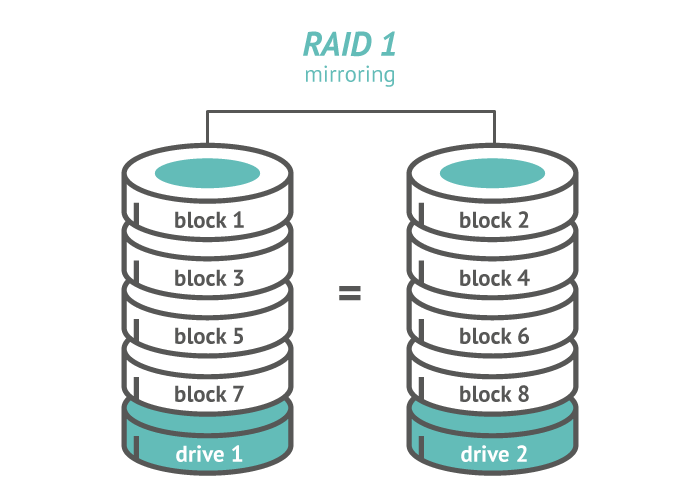 3. RAID 2: (Error-correcting coding) RAID 2 is comparable to RAID 5 but is less common. Disk striping takes place at the bit level rather than employing parity. In RAID 2, data is striped at the bit level rather than the block level, and an error-correcting Hamming algorithm is used. It is the only original RAID level that is not in use right now.

4. RAID 3: Byte-level striping and a separate parity disc make up this system. This RAID type is not currently in use since it performs poorly when a database contains numerous little data requests.

5. RAID 4: RAID 4 offers good sequential data access performance as well as good random read performance, but because all parity data must be written to a single disk, random write performance is subpar. Block-level striping and a separate parity disc make up this system.

6. RAID 5: (Striping with parity) RAID 5 offers Full Fault Tolerance and Excellent Performance. In file servers, web servers, and significant backups, it can be rebuilt using Parity data from all drives. Write data transactions take a little longer than read data operations to complete (due to the parity that has to be calculated). 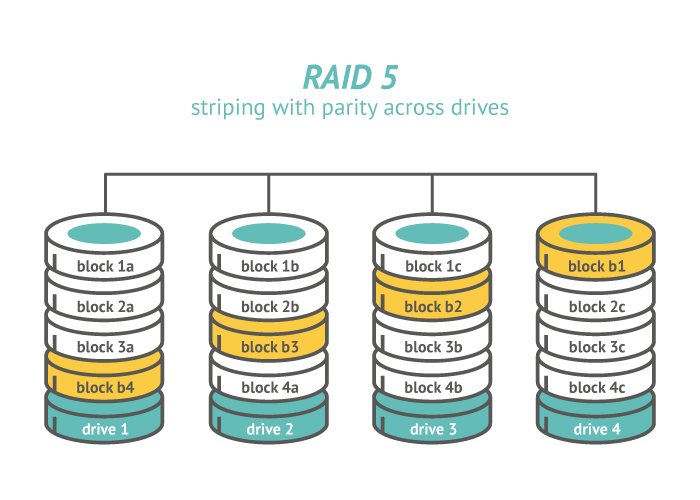 7. RAID 6: (Striping with double parity) There is complete fault tolerance with RAID 6. It uses a block pattern similar to RAID5, which is huge, dependable, and somewhat costly, but instead of using one parity function to generate two separate parity blocks per row, it uses two.

8. RAID 10 (1+0): (Mirroring + Striping) RAID 10 combines RAID 1 and RAID 0. RAID 1+0 is a common notation for it. It combines RAID 1’s mirroring and RAID 0’s striping. Good read and write performance is provided by RAID 10. It can be applied to database storage for high availability and performance. 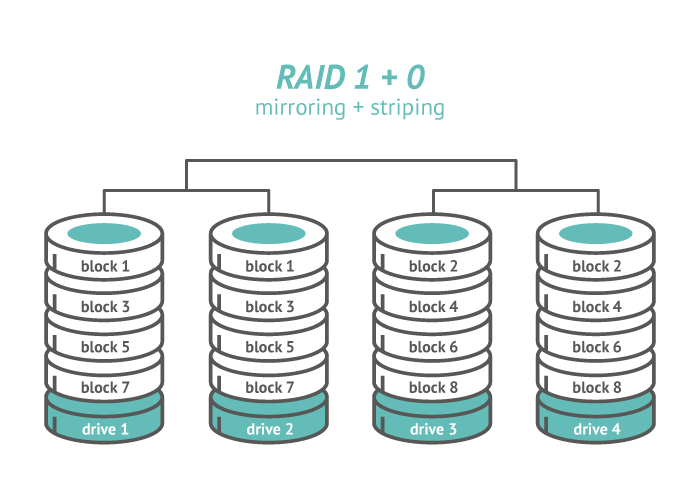 What Type of RAID you Should Use

At the time of reading this section, you know what RAID is and how it works. As you reviewed different types of RAID, let’s see which one meets your needs and priority at a glance.

Which RAID offers great performance, both in read and write operations?

Why RAID is not a substitute for back-ups?

Except for RAID 0, all RAID levels provide protection from a single drive failure. Even when two drives fail simultaneously, a RAID 6 system still functions. You still need to back up the data kept on a RAID system for total security.

In this article, you learned all you need to know about RAID and the way it works. To clarify if RAID will be useful for you or not, the advantages and disadvantages of RAID were explained. Also, in the part Who Should Use RAID, it is explained when you must start using RAID. Finally, types of RAID were discussed to help you check which one suits your needs. RAID can be utilized in big file servers, transaction servers, and application servers where fault tolerance and data accessibility are essential. But you need to consider that it is not always the best option for virtualization and high-availability failover.

If you encounter any problems, please do not hesitate to contact us. Our technical support team will try their best to solve your problems.