Get ready to challenge Ubuntu vs Oracle Linux since Ubuntu is the most used and popular Linux distro and guess what? Oracle is also estimated to replace Ubuntu! Developers publish Linux versions as Linux distributions or Linux distros for short. Since Ubuntu and Oracle are both Linux, they are very similar to each other, but also there are differences between them. You are here to find out whether you should choose Oracle Linux or Ubuntu after realizing the best Linux distros. In this article, Ubuntu vs Oracle Linux will be discussed in a detailed comparison to help you learn the pros and cons of each one individually.

So, to let this competition, get started, we will write a brief history of Ubuntu and Oracle Linux to freshen your mind to go through a head-to-head comparison. However, regardless of which distribution will be your choice depending on your needs, buying a Linux VPS must be your priority to start using your considered distro.

An Introduction to Ubuntu

Developed by the British company Canonical, and a community of other developers, Ubuntu is a free and open-source Linux distribution that is based on Debian. This popular operating system is available in Desktop, Server, and Core editions which can run on the computer alone or in a virtual machine. Ubuntu is fully translated into over 50 languages and includes essential assistive technologies. Ubuntu is successful in having a steady release cycle and keeping the operating system up to date by adding new features. While it is user-friendly and a good target for new novices, 20% of the 1 million websites in the world are operated and hosted via Ubuntu.

Ubuntu users can expect a large community because of its popularity. To avoid presenting repetitive content, refer to the What is Ubuntu article if you are interested in reading more about this most used Linux distribution. 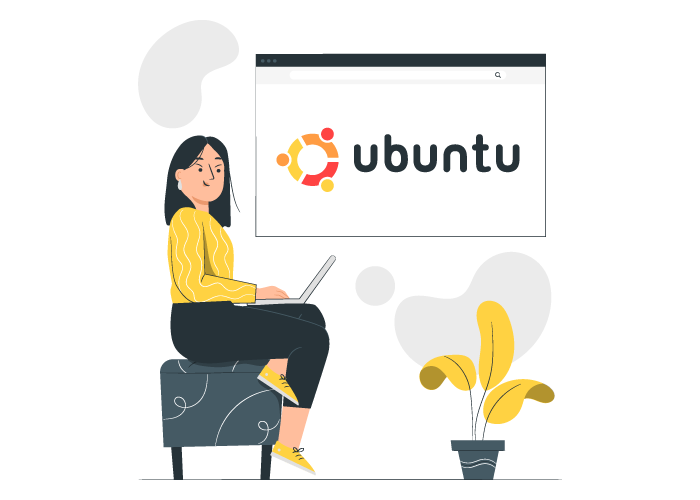 An Introduction to Oracle Linux

Previously, you have got familiar with Oracle Linux and its features. Oracle Linux is an open-source operating system. Two years after launching Ubuntu, Oracle Linux was released in 2006 by Oracle company. As you know, Ubuntu is Debian based and borrows its code. Oracle Linux also uses the base code of RedHat’s Enterprise Linux. Since Oracle is not as popular as Ubuntu, it does not have the overbearing market share that Ubuntu has.

But it does not mean that Oracle Linux is not one of the best Linux distros because it is the #5 ranked solution in top Operating Systems for Business. While Ubuntu is welcomed by beginners, Oracle Linux is popular among the large enterprise segment and professionals. 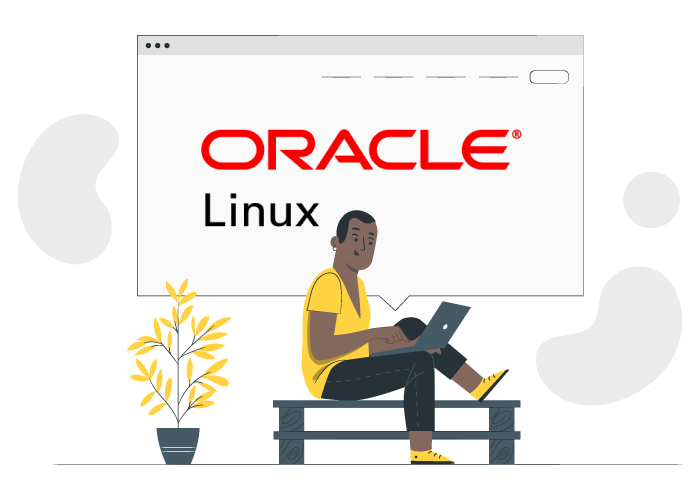 After reading about Ubuntu and Oracle Linux, now you know they both are Linux distros that are great on their own, but they are competing. The below table presents a quick view of Ubuntu vs Oracle Linux.

In this part, we are going to start comparing Ubuntu and Oracle Linux. Seven different categories will be discussed to gather a detailed comparison.  Stay with us to see which one wins this competition by gaining more advantages of each category.

Ubuntu, the most popular Linux distro, is highly secure with its default firewall and embedded security. So, we can say that Ubuntu is more secure than Windows because it provides all sorts of different third-party anti-viruses and firewalls. Unattended upgrades in Ubuntu 16.04+ are configured to automatically apply security updates daily. The security updates of Canonical are always available on Ubuntu first. As a Canonical product, Ubuntu is built with unrivaled security in mind. So, it is guaranteed that your Ubuntu software is secure from the moment you install it and will remain.

As an administrator, Oracle Linux ensures you have the features and tools you need to deploy your workloads securely. It is designed and configured to be secure by default. Oracle Linux and Ubuntu both programs are excellent out of the box. But Oracle is capable to use a host of different programs, technologies, and measures to ensure the default security of the program. However, the Security award goes to Ubuntu.

Ubuntu vs Oracle Linux: Ease of Use

Ubuntu and Oracle both have a decade of experience in development and launched many versions. So, both of them are brilliant in this category and worked to provide environments to help beginners feel free without facing any complicated problems. The other option for ease of use is the installation process status. Both Ubuntu and Oracle have similar, easy installation, and general setup that is easy for unprofessional users. The level of handling traffic outtakes is great in both of these distros. So, with this equal situation, we need to check for compatibility with other programs and features.

On Ubuntu, with its dedicated Software Center, you will face an easy accumulation and software installation. On the other hand, you can use the software development apparatus of oracle in your daily activities. What Ubuntu does can also be done from all manners of official and third-party sources. But Oracle Linux has inherent compatibility which means it is the winner of the ease of use category award.

Distributions have their own documentation on the internet to let users learn about them and find a certain way to solve issues and errors. Two kinds of documentation exist for distros. Publishers and third-party.
Canonical and Oracle provide official sources of documentation with PDF files that document all the features and the ins and outs of their distro. The third-party gathers and provides related information on different forums and websites.

The documentation of Ubuntu is inclusive. On the Oracle Linux website, you can find certain amounts of information. Since Ubuntu is more popular, a large and complete online audience is expected. Ubuntu is strong in both publisher and third-party documentation. So, it wins the award for this part.

Obviously, working with Linux is harder than with other OSs like Windows and macOS. So, when you decide to start using Linux, you are recommended to choose one of its easy-to-use distros with tech support providing. Why this is a recommendation? Because if you face a mistake while you are not an expert to solve it, you might receive major consequences. So, if you are using a Linux distribution to run your own business, or website, or to manage servers or hosting, plan for providing correct solutions for potential errors and issues.

Ubuntu and Oracle Linux will share the award in this category together. Yes, we have two winners in this part since they both are free of charge in regard to their licensees. But consider the paid services that are offered by Oracle Linux. So, if you prefer to use Oracle Linux as your hosting tool, you need to pay for having resources. While Ubuntu does not have any official tech support, we do not say that Oracle Linux is charging money for things that Ubuntu offers for free. But according to users’ reports, the prices of Oracle basic and premier packages do not seem to be fair enough.

As a result, if the third-party documented sources of Ubuntu be more supported to support issues, you will not have to pay for Oracle. So, let’s announce Ubuntu as the winner of this cost category for being always free for all its features.

Undoubtable, one of the most important reasons for Linux’s popularity is its customization and personalization. According to this inherent quality, many users, developers, admins, and coders prefer to work with Linux and its distributions. Depending on what distro you choose, you will have its own secondary layer of personalization and customization that enables you to change your work environment based on your needs.
You might know that GNOME is the pre-installed Ubuntu’s default desktop. On Oracle Linux, you are free to choose between GNOME and KDE desktops. So, it is clear that Oracle is offering more options out of the box.

On the other hand, users know that they can use any of the KDE, Budgie, XFCE, and MATE desktop options on Ubuntu and enjoy access to thousands of different third-party and even official extensions which the Software Center of Ubuntu offers. So, with no time-wasting Ubuntu is the winner of customization.

As a Linux user or user-to-be, you are aware that Linux usage has been raised alongside virtual machines and VPS services. VPSs and VMs are playing a major role in businesses as they are reliable methods of hosting websites for users who prefer to not use shared or dedicated hosting. Clearly, the availability and compatibility of a Linux distro in regard to hosting and VM compatibility matters for developers, coders, and admins.

As you read, Ubuntu is reliable in hosting according to the usage reports of websites (20% in more than 1 million). Oracle Linux is a technical winner in this category since it runs perfectly with Oracle Java and as result, the Oracle VM Virtualbox program has excellent synergy with Oracle Linux.

When should you migrate from Ubuntu to Oracle Linux?

It is not true and professional to advise all users to choose a specific Linux distro because the needs, priorities, and technical knowledge of users are different. You have read the head-to-head comparison, and you know which one won more advantages, and you can guess the result in a glance by looking at the comparison table.

However, if the tasks that you require from your distro do not extend beyond the generic and everyday tasks, you can choose Ubuntu and enjoy all its features and advantages. But if you are going to manage a server, host a website or use a VPS, you are highly recommended to use Oracle Linux and have the benefits of its sophisticated ecosystem. 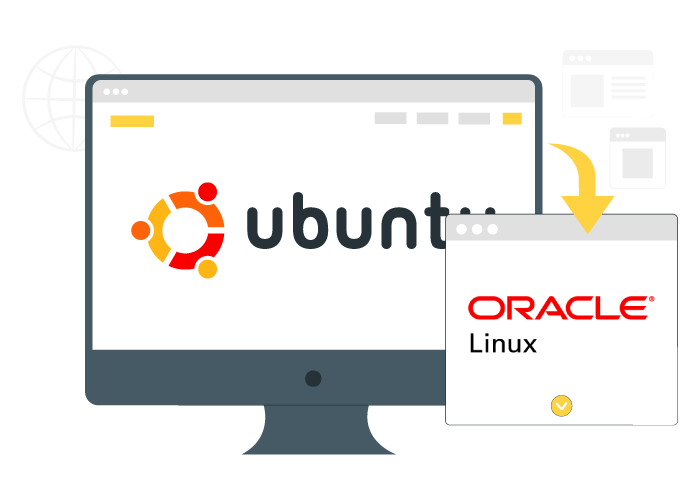 In this article, a detailed comparison was presented of Ubuntu vs Oracle Linux. After reading about the definition of these two Linux distributions, seven different categories were discussed to introduce a winner of the competition. However, you are the one who decides to work with Ubuntu or Oracle Linux by considering your needs and priorities.

This article is not the first comparison of the OperaVPS team. If you are interested in Ubuntu and need to read more comparisons, Manjaro and Kali Linux already have been compared with Ubuntu and all the required details are extracted. Join our community and share your experience of working with any mentioned distros in this guide and the result of your migrations to any one of them.