Centos or Ubuntu – Which One Is The Best Choice?

After purchasing VPS, some of you may be concerned about choosing the right operating system for your business; Usually, the majority become hesitant between Linux distributions; which one is better? You know that Linux has different distributions if you can not choose between the two popular operating systems, Ubuntu and CentOS, for web servers; In this article, we intend to examine the differences between them.

Ubuntu: Ubuntu is a user-friendly Linux distribution based on Debian Linux. The word Ubuntu is Retrieved from the Nguni Bantu language, and It Expression the Guidance of Ubuntu to help people in the community. This version of Linux was created to make it easy to use the operating system and have a strong and perfect support community.

Ubuntu has a powerful software repository that is also weightless; It does not require powerful hardware and is almost compatible with most hardware. It also fixes bugs with its regular updates and provides a simple background for design. You can customize features; From graphical interface to Linux web server packages, and its security is customizable. Ubuntu is highly secure and can install third-party software and support most of the world’s living languages. The benefits of Ubuntu tempt any user to use it.

CentOS: A commercial distribution of the Linux operating system, which stands for Operating System Community Enterprise, is an open-source project developed and supported by a large community based on Red Hat Enterprise Linux (RHEL). Red Hat Linux has been a stable and reliable distribution since the beginning of Linux, mostly used in high-end corporate IT applications; all previously released versions of CentOS are based on RHEL versions and product-compatible binaries. All available programs for the business system, without restrictions and additional compilers, also work.

CentOS is the most popular Linux distribution for available web servers and approximately 30% of users that use Linux VPS prefer CentOS operating system.. CentOS, like Ubuntu, is very stable and configurable, and due to its initial dominance, many conventions are built around the CentOS architecture, are suitable for large organizations and companies, and have excellent security; This operating system uses Security-Enhanced Linux (SELinux) to protect your data against cyber-attacks and is very flexible and customizable. This platform tries to keep your system up to date with the help of YUM (Yellowdog Updater Modified).CentOS shines through in the web hosting industry.

A common feature of CentOS and Ubuntu

One of the general features of CentOS and Ubuntu distributions is that they are free to download, you do not need to pay, and you can easily install them on VPS. You can also download any of these distributions to USB without permanent changes to the operating system; A boot drive allows you to check the system for a pre-installation test.

Another important feature is their stability and compatibility, and they are quick to run,  they do not require powerful hardware, and because they do not take up much space on the hard disk, They have fast performance.

Essential differences between CentOS and Ubuntu

It is not possible to say exactly which one performs is better; in fact, both operating systems have different performance depending on the server hardware and, more importantly, how the operating systems are configured; If you configure the server in the best way and improve its security, you will surely see good performance. Of course, CentOS, like most Linux versions, use Yum, which is derived from the RPM package, and as built into the RedHat architecture, many users are familiar with its environment. Many CentOS server services, such as cPanel, are made to run only on Red Hat Linux, but Ubuntu focuses on usability and uses the apt-get package manager, which is very different from Yum, but their functions are pretty much the same. However, Ubuntu Linux offers a more integrated software installation process; Most applications use the CentOS server.

It should be noted that CentOS has fewer features and updates than UbuntU but has admirable stability and security.

CentOS and Ubuntu have their package management and different architectures.

CentOS is based on the Red Hat Enterprise Linux architecture, while Ubuntu is based on Debian; This difference is evident in the choice of software packages, but both distribute the update tracking and installation process through the package manager.

CentOS benefits from the Yum package manager and install rpm packages. And Ubuntu uses the APT package manager, which is abbreviated as Advanced Package Tool; From software with deb packages supports; This package management tool is very powerful, and you can also use it to update the operating system version. But in general, they have the same function with the difference that deb packages Cannot be installed on CentOS and vice versa. Because the package management tool in RHEL is called RPM or Redhat Package Manager, CentOS can not use it directly and must first download and install RPM through the yum tool.

Another difference in the architecture of these two versions is in the structure of the software packages. For example, Apache is one of the most common software packages in web servers that run differently in both CentOS and Ubuntu distributions; The Apache service in CentOS has the httpd icon, but in Ubuntu, it is called apache2. 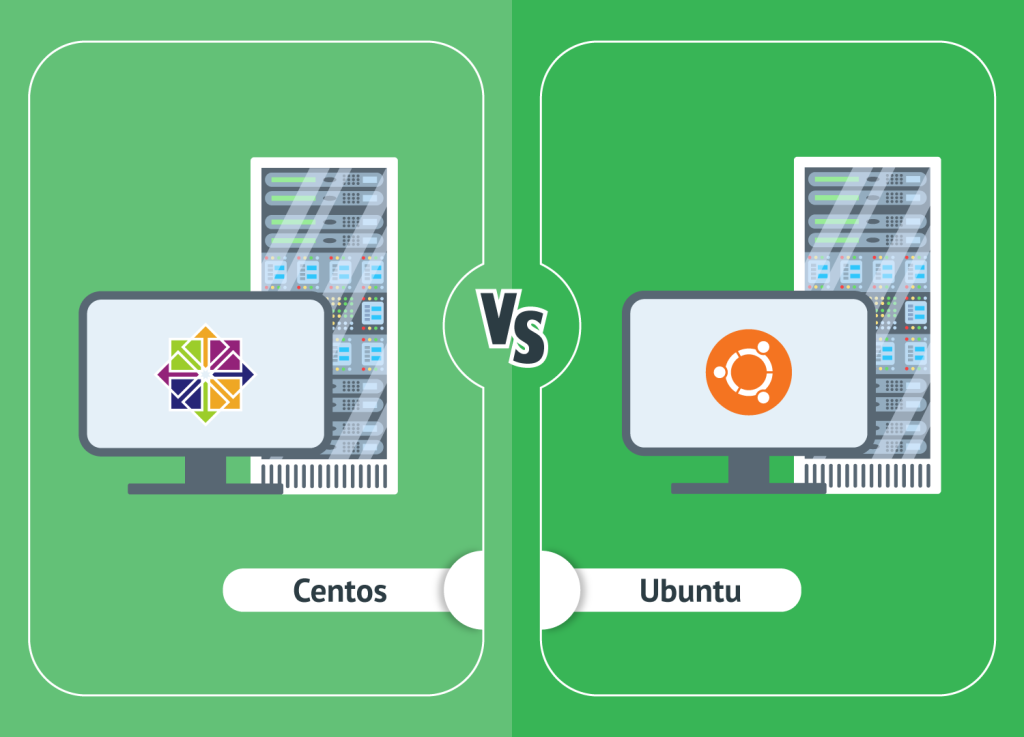 Ubuntu releases new versions every six months with intermittent updates, and It also releases LTS versions every two years with support (long term for five years). Ubuntu, with every update, offers new software, various features, and new technologies and fixes any bugs quickly by releasing a new version. Users can choose between “latest and greatest” or “tried-and-true” depending on the different versions.

Compared to Ubuntu, CentOS has a slower update cycle due to its smaller development community and extensive testing of each component before release. But with each update, it offers greater security and compatibility, And it Supports up to 10 years from the release date of each new release. Slow-release of new CentOS releases disrupts software updates and runs.

In general, both operating systems are regularly updated and are secure and stable.

Ubuntu, with its attractive design and graphical user interface with good performance, is a good option for beginners who do not have much expertise in how to use it because it is very simple to use and has a simple command line to run applications. But this is not the case with CentOS. Using the CentOS platform requires technical knowledge and expertise.

CentOS providers and the developer community support it and forums that help users fix bugs. To some extent, CentOS relies on the Red Hat community to manage and detect problems. CentOS, with its open-source capability, provides access to the source code for all users and developers, and through this, the growing community supports this distribution. CentOS delivers the best long-term support services (10 years); With the release of a new version, every two years and it helps reduce costs because you can plan a single operating system cycle for a complete decade. In this case, the meaning of support is helping from developers and their commitment to updates.

But Ubuntu support is different; Ubuntu releases a new version every six months and supports each version for nine months; There is also no full support for each version, and users will get the latest version with each update.

The Ubuntu version does not have a graphical user interface on the server and has simple installation steps, but in CentOS, the installation process is easier for system professionals and administrators than for beginners. Configuration in these operating systems has different commands, and an essential difference is in the management of packages.

Which one is better for choosing a server operating system?

Your decision should reflect the needs of your web server. If you are new to Linux or would like to work with the latest features, Ubuntu may be a better choice. The Ubuntu installation and upgrade process is more intuitive than Centos. Also, Ubuntu has a larger market share than CentOS, and in the event of a problem, there is plenty of online help. In addition, frequent Ubuntu updates include many features that can encourage you to discover and learn more about Linux. Looking for longer support terms, CentOS is an excellent choice for you, and CentOS is more secure than Ubuntu; This is because Ubuntu has more updates than CenOS, so it probably has more zero-day vulnerabilities than CentOS, and on the other hand, the stability of the operating system decreases despite successive updates.

As a result, CentOS is more suitable because of its excellent stability and security and its support for Cpanel as a data center server and web hosting operating system. In any case, you should not worry that one is better than the other; Security, stability, and performance are almost equal, and the main criteria in choosing the right operating system should be the purpose of your activity and ease of use.

Can we install any software on both operating systems?

Finally, which one can be a good option for users in general?

Ubuntu with a library full of free information and better support, as well as more updates than CentOS can be a good choice for people who want a faster web server or site, but also, CentOS with security Almost more than Ubuntu, it is a top priority for people who own an online business; Note that the speed and efficiency of each are the same.

The purpose of presenting this content and reviewing the two most popular and main Linux operating systems was to help your dear ones in choosing an efficient and suitable operating system for your activity; However, it is better to configure the web server optimally and consider the server security before deciding on the choice of the operating system. In the comments section, share your questions and experiences about using CentOS and Ubuntu operating systems.

Thank you for being so supportive.