WireGuard is open-source and free software that implements encrypted VPNs. Ease of use, high speed, and low attack surface are the main goals of its creation. It passes traffic over the user datagram Protocol(UDP) which uses no handshake protocols. WireGuard has been adopted by many VPNs since it is designed to perform better than common tunneling protocols like IPsec and OpenVPN. While it was released for Linux initially, it is now cross-platform and supports Windows, macOS, BSD, iOS, and Android. To have a secure, easy-to-use, and simple VPN solution, WireGuard shines as the best option. It is currently under heavy development but is deployed. WireGuard is suitable for both smartphones and fully loaded backbone routers. It lives inside Linux Kernel that causes a high speed for secure networking.

In this article, you will learn all you need to know about the WireGuard VPN protocol. To start having your own online private space and test different VPNs, Linux VPS is a good choice. Say hello to 24/7 support.

What is WireGuard VPN Protocol

A VPN Protocol enables your computer or phone communication with a VPN server. For more explanation, to keep your data private, a VPN creates an encrypted tunnel between you and the internet. So, to secure all your internet traffic, you need to use a VPN Protocol. Initially, WireGuard was released for the Linux kernel, the main component of the Linux operating system known for security and speed. WireGuard is a VPN protocol that is famous as a fast, modern, and secure way to connect to a VPN server. It is capable to run on your device using advanced cryptography.

If you need to know some basic knowledge or need to freshen your mind, you can read about the different Protocols of VPN. But come back soon to go on.

Is WireGuard replacing other VPN Protocols?

When it comes to comparing VPN Protocols, vulnerability is a very important option. Compared to alternatives, WireGuard allows professionals to find potential vulnerabilities and bugs more quickly. It uses less code, therefor hackers would access a smaller ‘’attack surface’’ which makes exploitation harder. OpenVPN is a well-known protocol that helped WireGuard get more popular. Because after each comparison, WireGuard won the fast, easy-to-use, and secure protocol competition. Despite the WireGuard brilliant features, It is still not supported by all VPN services which makes the replacement process slow. In the next part, you will review all its important benefits.

What are WireGuard Benefits?

Here are the outstanding advantages of WireGuard that clarify the reason we say this tunnel is one of the best VPN solutions in the industry. The important role of WireGuard in cybersecurity is undeniable. It is fast and secure at the same time which is so valuable in the world of VPN Protocols.

While strongSwan/IPsec has 400,000 and OpenVPN/OpenSSL has 600,000 lines of code, the WireGuard consists of just 4000 lines of code. This is a remarkable feature compared to at least open-source VPN Protocols. The small codebase of WireGuard causes a minimal attack surface that can be exploited by cybercriminals.

Easy to configure and deploy as SSH? So, you are talking about WireGuard. IT professionals can easily set up WireGuard since it is not much harder than configuring SSH. The client and server parts of it are easy to install. Just like Mosh, it is capable of roaming between IP addresses. Once you choose WireGuard, you will not need to manage connections, be concerned about state, or manage daemons.

Unlike WireGuard, some VPN protocols which are not so fast, use handshake authentication between clients. But WireGuard is able to connect and reconnect when roaming between networks quickly. Its design helps it to speed up the VPN connection. Other VPN protocols sometimes feel brittle or clunky.

WireGuard is highly secure since it uses the latest modern cryptography with secure defaults. However, the users do not need to be concerned about speed or usability because they are provided at the same time.

Tip: If you need to pass all security boundaries and protect your personal information and browsing, there is an accomplished solution. Using Mikrotik as a private VPN server. A dedicated IP and trusted tunnel can be easily set up with a Mikrotik VPN Server.

You can count on the speed of WireGuard since it uses fast cryptography code. Even it is faster than userspace VPNs because its low-level component lives within the Linux kernel.

Being open-source helps the VPN ensure that features don’t infringe on user privacy and security. And a large VPN community is ready to fix any issues, audit the code, and improve its design.

Easy to set up

It is both easy to use and easy to set up. Users are enabled to connect via their VPN application with the click of a button.

The good news is that WireGuard has no major weaknesses but despite all mentioned advantages, no VPN Protocol is perfect. Let’s see what are the pros of this young protocol.

WireGuard does not work without extra software. (Just on some Linux distros works). So, you need to change your mind about choosing WireGuard if you prefer to use a VPN on a device where you can’t install apps because the offered client apps are not enough.

As you know, WireGuard is fast. The UDP transport layer helps it to speed up a VPN connection. But it could be an issue because using VPN could not be a secret anymore. Therefore, bypassing the firewall to access your considered content is not possible. Do not use WireGuard if you wish to not let your government, ISP, or employer observe you are using VPN.

How does WireGuard Protocol work?

As we mentioned, WireGuard creates an encrypted tunnel using modern cryptography and network code. If you switch from mobile data to Wi-Fi (IP changing), the VPN would not disconnect due to its clever strategies. WireGuard’s speed and security rely on its unique design and encryption methods.

If you feel to start using this VPN Protocol, you can trace the WireGuard installation guide on its main website. 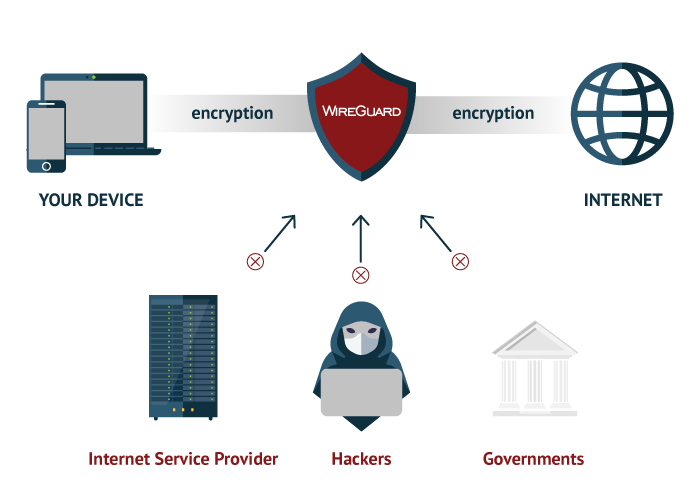 It is a fact that WireGuard is still not supported by all VPN services, but there are some commercial VPN providers have started using it quickly.

Generally, you can create your own VPN Server and set it up to support WireGuard out of the box. Then, you will face fewer configuration options to tweak for maximum security. Firstly, you need to know the best OSs to create VPN Server.

When compared to earlier standards, WireGuard is extremely fast and easy to configure. WireGuard connects faster. Options like IPSec and OpenVPN were sizable, inadequately examined codebases that might have hidden a variety of security flaws. All of this is made simpler with WireGuard, which also provides a superior end result.

In this part, we are going to explain how WireGuard is different from its alternatives; OpenVPN and IPSec/IKEv2.

At the moment, OpenVPN is the most widely used VPN protocol. Similar to WireGuard, OpenVPN is open-source, has minimal security holes, and frequently needs extra files on most devices. But modern computer CPUs weren’t considered when designing OpenVPN. Due to its contemporary methodology, WireGuard has a number of performance and security advantages over existing VPN protocols. In one test, WireGuard outperformed OpenVPN in terms of raw speed by 15%. WireGuard was 56% faster when OpenVPN was limited to its slower TCP mode. Even though the best-case comparison doesn’t show a striking improvement, WireGuard’s performance boost will be noticeable, especially while downloading large files.

Both OpenVPN and WireGuard are open-source, have a small number of security flaws, and need additional configuration files to be installed on the majority of devices. The difference is that WireGuard is far more effective and uses much more sophisticated cryptographic libraries. Additionally, the WireGuard protocol has a considerably smaller impact on battery life than OpenVPN.

If you guess you would prefer OpenVPN, find more details about OpenVPN and the way it works to be able to choose better.

Business VPNs frequently employ IKEv2/IPsec, which offers a number of encryption techniques. Although IKEv2/IPsec is a more flexible protocol than WireGuard, IKEv2’s encryption techniques are more dated and, in general, less effective. From point of faster primitive cryptography and built in the Linux kernel, WireGuard wins the competition. It is also faster consistently. The design of IPsec is bulkier and heavier, and because it has more lines of code than other traditional VPN protocols, it is more prone to hacking. In contrast, WireGuard is faster, more secure, and made expressly for computers in the present age.

IKEv2 and WireGuard are different in that the former will be supported by default on the majority of devices. You’ll need to install extra files in order to use WireGuard. It does, however, have a benefit thanks to its more recent cryptography libraries. IKEv2 will be quick in most usage scenarios despite not requiring a lot of CPU power to defend against attacks.

You can install WireGuard on your own VPN server if you don’t want to utilize a commercial VPN package. For the average user, setting up a personal VPN server is a challenging operation, but WireGuard makes it significantly simpler.

Depending on your system, there are different ways to set up a WireGuard server. So for comprehensive instructions, see the WireGuard website.

By the way, you need to pass 9 main steps to set up WireGuard VPN.

The WireGuard software for mobile devices allows you to just scan a QR code rather than painstakingly copying certificates and inputting information. You may be given a QR code to scan by your VPN service provider or server software. Hit the plus symbol and select “Create from QR code” from the WireGuard app. 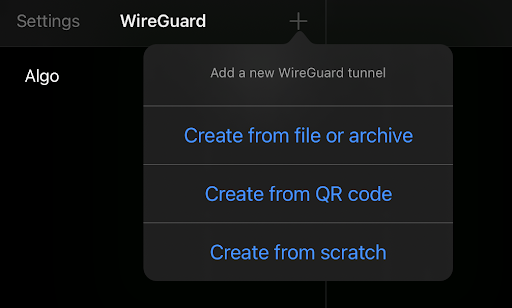 WireGuard typically outperforms OpenVPN. Compared to OpenVPN, WireGuard is simpler, quicker, and easier to set up, although not all devices are compatible with it yet. For instance, you might have to remain with OpenVPN if you're using an older router for your router-based VPN.

How is WireGuard for torrenting?

Torrenting is secure using WireGuard. But your tunneling protocol decisions regarding privacy issues are just as crucial as turning on the kill switch and being cautious in general.

In this article, you got familiar with WireGuard and the way it works. You reviewed all its main advantages and disadvantages. Now, you know which VPNs support it. The full comparison of WireGuard with its serious alternatives helps you to do the math and choose which one is your favorite. If WireGuard is your choice, you can use the parts of the setup and configuration guides of this article to start using it. Old VPN Protocols such as OpenVPN and IPSec are being used by most people, but it does not mean that are perfect. Low speed, outdated cryptography, and insecurity are the issues that users may face. WireGuard is young but fresh covering the most important downsides of its alternatives. Feel free to ask your question or share your experience of using your current VPN Protocol.