With each new distribution, Linux users always enter a wonderful and exciting world of Linux, making them more interested in the Linux family. The subject of our article is AlmaLinux, an enterprise, stable distribution of Linux developed by the CloudLinux team to fill the void left by CentOS after the discontinuation of CentOS8.

CloudLinux is a shared hosting service provider that offers its unique commercial operating systems under the titles CloudLinux OS, Kernel Care, etc., to users and private companies. Alma Linux is designed to be compatible with RHEL and CentOS pre-Stream and is a Practical operating system for businesses due to its dedicated community and binary compatibility with Red Hat Enterprise Linux. For this reason, this enterprise distribution has become very popular among organizations and companies.

What is Alma Linux?

Because Alma Linux follows a transparent approach, it provides the possibility of active participation for users and has been able to attract a wide range of users with its capabilities in a short period and the same year of its release (2021) and has become a strong competitor for other Linux distributions.

What was the purpose of designing Alma Linux?

Alma Linux is a stable enterprise distribution developed targeting businesses and organizations and designed to meet business goals. Although AlmaLinux is typically considered a free alternative to Red Hat Enterprise Linux, users can also use it to build a secure, application-centric operating architecture.

Also, Alma Linux, in addition to being used in physical and desktop environments, is also used in virtual and cloud-based environments. Due to its stability and reliability, it is the ideal option for use on a server. To benefit from the fantastic features of this operating system, you need to buy a Linux VPS first, and by following the steps to install the Alma Linux operating system on the server based on the training we provided before about installing Alma Linux, you can also use this operating system on your server. Also, Alma Linux is not only designed for business purposes but is also a good choice for personal use.

With the discontinuation of CentOS8 at the end of 2020, which was a free RHEL clone and very popular among developers, the CentOS stream was introduced as a replacement. CentOS and RedHat announced the End of Life (EOL) for CentOS Linux on December 8, 2020, and asked users to pay attention to the CentOS Stream project. In September 2019, RedHat unveiled CentOS Stream, an upstream development platform explicitly built for CentOS.

One of the prominent features of CentOs was binary compatibility with RHEL, which we did not see in CentOS Stream. CentOS Stream is a version that reviews and tests upgrades for commercial RHEL. This feature of CentOS Stream may be helpful for some developers, but it is not ideal for all users. Therefore, users felt a need for a powerful alternative to CentOS.

After that, many people and organizations tried and released their own Linux distribution to fill the CentOS void.

Many distributions have been proposed to replace CentOS; meanwhile, the Cloud Linux development team promised to release a free, community-based, open-source distribution to users in early 2021.

In addition, the Cloud Linux development team has announced that the AlmaLinux operating system will always be free and open source, and from the beginning of the project, the community can participate in the project, from the Election of the board of directors AlmaLinux Foundation and AlmaLinux OS to any development and design. Also, this team entered the world of Linux with the motto “For the community, by the community.”

You may be wondering what Alma means; in Spanish and other Latin languages, Alma means soul. The name “AlmaLinux” is a token of appreciation to the Linux community. According to them, the community is the heart and soul of Linux, and anyone interested in a Linux distribution owes it to the community’s efforts.

Alma Linux tried to continue the original idea of CentOS, which emphasized free and binary compatibility with the RHEL version.

On February 1, 2021, the beta version of AlmaLinux was released. At the end of March of the same year, its first stable version was released with at least eight years of support (that is, it has support until 2029). Currently, Alma Linux 8.6, codenamed Sky Tiger is its latest version.

Alma Linux 8’s planned end-of-life (EOL) date is May 31, 2029, because Alma Linux is a downstream rebuild of RHEL 8 and follows the RHEL 8 lifecycle. It should be noted that AlmaLinux is supported by many reputable companies, including ARM, AWS, Equinix, and Microsoft.

The main idea of free and enterprise distribution of Alma Linux is commendable, but we will further attract you to Alma Linux by presenting the features and advantages of this operating system. As a powerful and popular distribution for CentOS, Alma Linux certainly offers features that have made it popular among users in the short time it has been released. Stay tuned as we continue to explore the benefits of Alma Linux.

An excellent alternative to CentOS

Users who have a special dependence on CentOS and are looking for a suitable alternative to CentOS can choose Alma Linux as a replacement without any worries. Because Alma Linux creates a familiar experience for CentOS users due to its binary compatibility with RHEL, and CentOS users can quickly get used to the Alma Linux environment. The fork of RHEL differs in detail from its famous predecessor in terms of design and performance. Additionally, a script can easily migrate existing CentOS installations to an Alma Linux environment.

The main feature of AlmaLinux is that it was founded and developed by a group with knowledge and experience in Linux distributions. With the Cloud Linux team’s support in financing and development, this distribution has attracted considerable attention from the IT community. Since this distribution is supposed to be run by the Linux community and the AlmaLinux open-source foundation, there is a significant commitment to having good community support.

The community-driven nature of Alma Linux will be even more critical in the future than it is now, as changes and improvements are made collaboratively and implemented quickly. This distribution offers solutions considering the needs of users to answer their needs. Alma Linux’s strong support by the community makes many guides available to new users.

To ensure Linux systems are always secure, up-to-date, and functional, CloudLinux recently released TuxCare, a support service that provides vendor-level support in collaboration with independent technology. By doing this, they provide premium support for all different Linux distributions, not just Alma Linux. 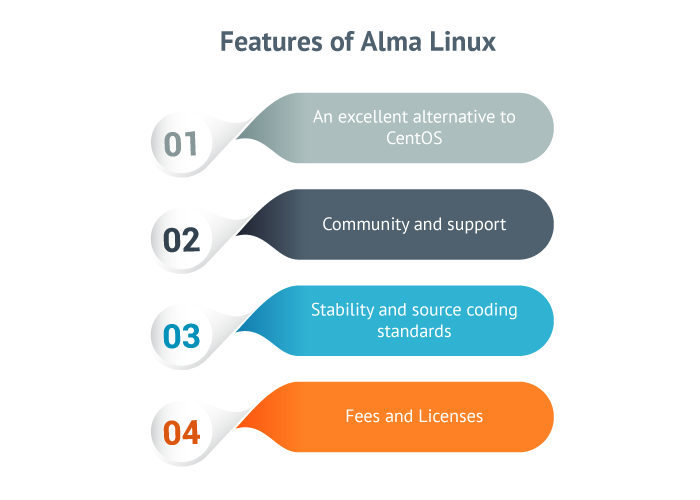 Although the source code of Alma Linux is developed based on RHEL, but with the participation and consultation of the community, the source code can be optimized or modified according to your needs. Because AlmaLinux makes its source code and releases notes publicly available so that users can easily create their own updates and adaptations.

One of the prominent features of Alma Linux is its stability compared to other competitors, which makes it a safe and secure option to use. Since Alma Linux is a downstream version of RHEL, it follows the RHEL stable release and has RHEL binary compatibility. The new software is first available for the CentOS stream, and after fixing the bugs, Red Hat Linux Enterprise will update the commercial version, then it will reach Alma Linux users; However, this process is more time-consuming, but instead, it has been tested and checked.

Therefore, Alma Linux can be introduced as a stable, secure, and production-ready distribution of Linux.

In addition, you do not need a license, service contract, or registration for use, and you will not even face any restrictions on use. Alma Linux is a free and valuable distribution to its paid competitors that is committed to being open source.

Although Alma Linux has attracted many fans in this short time, it is a new and young Linux distribution; after a few years can confidently evaluate Alma Linux. However, there are several alternatives to Alma Linux, one of which is Rocky Linux. Rocky Linux, as we have already introduced you to nature and features of Rocky Linux, is also known as an alternative to CentOS. This distribution is also a new distribution of Linux that has not yet been fully tested in every aspect.

Ubuntu and Debian are two popular and functional Linux distributions that have been popular and used by Linux users for years; they can be an excellent alternative to Alma Linux.

openSUSE Leap is another reliable and user-friendly alternative to Alma Linux that relies on community contributions.

Pay attention to the following points:

AlmaLinux and Rocky Linux are RHEL rebuilds released to replace CentOS8 on December 8, 2020. When Red Hat announced the discontinuation of CentOS Linux 8, both distributions developed to fill the void of CentOS 8 and competed with each other. Therefore, it can be concluded that they are somewhat similar to each other; in addition to what they have in common because they are both based on RHEL, they are also very similar to the upstream version of RHEL. The difference between the two can be seen in the release cycle, response to bug reports, communication, and project lead transparency.

As you know, Alma Linux is one of the candidates to replace CentOS8; update errata is a great new feature that AlmaLinux offers. In Alma Linux, you can perform security-oriented package management by installing security-related updates, searching for vulnerabilities that have been fixed, and other tasks thanks to the availability of updating metadata. Although CentOS Linux does not provide updated information metadata, package announcements were made public via a mailing list in CentOS 7. The update info metadata and even package announcements are missing from the CentOS-announce mailing list in CentOS 8.

The only purpose of AlmaLinux is to replace CentOS8 after it is discontinued. Due to its design, AlmaLinux does not include the latest versions of packages distributed with CentOS Stream. If the upstream distribution, such as CentOS Stream, fits your technical and business strategies, it is better to keep it available for the future.

Does AlmaLinux have a graphical user interface?

You must install the GNOME package on the system to enable GUI in order to use AlmaLinux 9 in graphical mode.

Who should use Alma Linux?

Any user who is looking for a potential replacement for CentOS8 is the best option to use the transfer and migration without the extra cost and hassle of Alma Linux. Also, businesses looking for a free and stable enterprise distribution for their business purposes can benefit from Alma Linux.

Alma Linux has so far lived up to its claim and becomes a powerful, reliable, and user-friendly alternative to CentOS. It will probably continue to play its role in this direction with the help of its developing community in the future and will reach a superior position among its competitors with its growth and development. In the not-too-distant future, Alma Linux will be introduced as an ideal alternative to RHEL.

As a stable and free enterprise distribution, Alma Linux is the choice of most businesses and organizations that are looking for a secure and stable operating system. In this article, we have explained everything you need to know about Alma Linux and introduced you to Alma Linux. If you have any questions about Alma Linux, you can share them with us in the comments section.

We appreciate your support.