As two new Enterprise Linux distributions, it makes sense to discuss AlmaLinux vs Rocky Linux while almost one year has passed since Red Hat’s announcement of discontinuing CentOS 8. Both AlmaLinux and Rocky Linux are the two most popular RHEL forks. Linux-based OS fans may continue with CentOS Stream, but some bugs are reported that need Red Hat Engineers to release security updates to be solved. Undoubtedly, these distros are ideal to replace CentOS. But the main differences must be considered to make a correct choice.

In this article, we are going to explore 10 key differences between AlmaLinux and Rocky Linux to help you find which one might be your favorite and meet your needs. Having Linux-based VPS allows you to take your operating system to a new level. Regardless of which distribution will be your choice depending on your needs, buying a Linux VPS must be your priority to start using your considered distro.

The CentOS team accepted a deal with Red Hat in 2014, ten years after when Lance Davis and Gregory Kurtzer founded CentOS. Both AlmaLinux and Rocky Linux are downstream rebuilds of Red Hat Enterprise Linux. AlmaLinux vs Rocky Linux has some considerable results, but they are not so much different. Join us with this guide to review all the required details to display a correct view of AlmaLinux vs Rocky Linux. Previously, you have read about the history of rocky Linux and also learned what AlmaLinux is. So, we will cut to the chase and avoid presenting repetitive content.

The founder of CentOS, who is behind Rocky, has a wealth of expertise in this field. However, AlmaLinux is primarily developed by the CloudLinux team, who have excellent experience with CentOS as well. As a result, the core development team has more than ten years of experience rebuilding RHEL. Therefore, they both have experience.

To freshen your mind let’s start with a comparison of the pros and cons and then review the main and key differences in the following of this guide. As we mentioned, AlmaLinux and Rocky Linux are generally similar to each other. But there are options you need to check to be able to find the winner from your point of view. So, have a look at the advantages and disadvantages of them below. 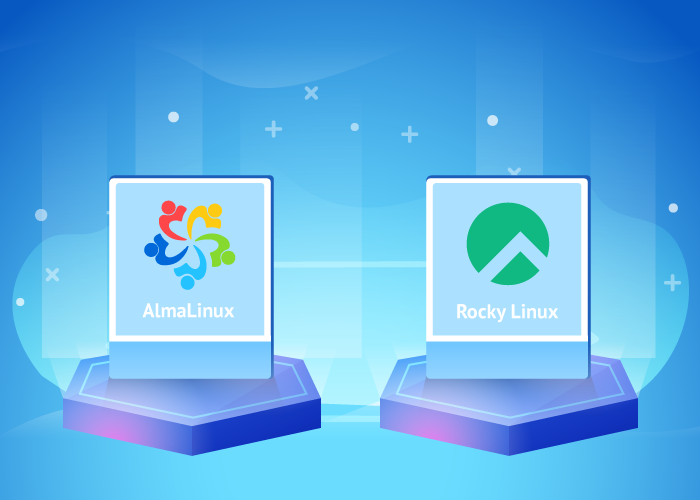 the following table gives you some helpful information at a glance.

The CIS (Center for Internet Security) Benchmark is included with the AlmaLinux OS. All users can safeguard the configuration of their systems with CIS Benchmark. A tool called CIS-CAT even provides a comprehensive assessment of all potential security concerns. The beta versions of AlmaLinux 8.4 and 8.5 support CIS Benchmark. Additionally, the OpenSCAP tool is a game-changer for individuals who wish to proceed with utmost care. This program automatically looks for vulnerabilities in your system. The Network Time Security protocol is included with Rocky Linux 8.5 for usage with NTP and Secure Boot support.

Let’s see some other brilliant features of Rocky Linux 8.5:

Both Rocky Linux and AlmaLinux are created utilizing unique build procedures. To create its assets, AlmaLinux uses a specially designed AlmaLinux Build System (ALBS). The first build on build.almalinux.com is from September 15, 2021, so I believe I can safely assume that AlmaLinux 8.6 and 9.0 were built with ALBS, though earlier releases may have also been. I can’t find any concrete information about when AlmaLinux started using this build system, or if they were using it from the beginning, but earlier releases may have also been.

The typical panel in KDE Plasma makes it simple to enjoy online browsing, file management, or any other particular activity if you are a new Linux user. Your particular needs will ultimately determine whether you choose the Alma or Rocky Linux desktop environment.

Rocky Linux and AlmaLinux both provide migration tooling to aid in the conversion of a system from another distribution. The ELevate utility from AlmaLinux is advertised as supporting “migration between major versions of RHEL derivatives. Simple migration from any 8.x to CentOS 7.x.
The migrate2rocky tool is available with Rocky Linux. Rocky’s utility provides various scripts for migrations from EL8 to Rocky8 or EL9 to Rocky9 inside a major version. By mandating the upgrade of the EL8.x system to at least 8.5, migrate2rocky reduces the number of variables it must manage during migration.

Gregory Kurtzer, a co-founder of CentOS Linux, established the Rocky Enterprise Software Foundation (RESF), a Public Benefit Corporation, specifically to “build a community around enterprise, research, academia, individuals, and other institutions” for Rocky Linux. The RESF is made up of team leads and other dependable members of the Rocky Linux community, and its objectives are to increase transparency and lessen the likelihood that one person or group will seize control of the project.

The AlmaLinux OS Foundation, a 501(c)(6) non-profit organization, provides AlmaLinux. It was created with the following goals: I further develop and maintain AlmaLinux OS as a no-registration, ad-free, stable, open-source Linux distribution for the benefit of and free use by the public, (ii) facilitate and promote the growth of a community of vendors and partners delivering solutions based on or complementary to AlmaLinux OS, and (ii Contributor Members, Mirror Members, Sponsor Members, and Alumnus Members make up the Foundation.

On the home pages of their websites, probably 99% of Linux distributions proudly fly the flag with the term “Community” on it. We all know that the Linux community can be built around this foundation.
The community is something that some Linux distributions truly value and appreciate. Others simply see it as a marketing strategy.
As long as you have a question, there is always a member of the AlmaLinux team available to welcome you and provide an answer. Sadly, I am unable to say the same with Rocky Linux.

The methods used by Rocky Linux and AlmaLinux to generate their distributions differ slightly from one another in terms of upstream source, build processes, and architectural support. Being a product of CloudLinux, AlmaLinux uses the company’s current CloudLinux “RHEL clone” as the upstream. Rocky Linux uses the public git repository of Red Hat as its primary source. Are there advantages to one over the other? Not really, considering that CloudLinux apparently draws directly from the Red Hat public git repository.

Commercial support is available for Rocky Linux and Almalinux. TuxCare is included in the first, whereas CIQ is included in the second.
KernelCare, as it was known in CloudLinux, is included in TuxCare. It is the new CloudLinux umbrella brand, which now includes support services for existing distributions as well as live patching for crucial components and systems past their End-of-Life.

In the case of Rocky, Kurtzer recently introduced CIQ, or Ctrl IQ, to offer assistance for Rocky Linux enterprise clients in sectors like high-performance computing (HPC), media, pharmaceuticals, and more.

To the extent that CIQ sponsors the Rocky Enterprise Software Foundation financially, as well as by recruiting engineers and devoting their time to the project, it is clear that CIQ is deeply invested in the success of Rocky.

Initial release lag
The original release latency is the first. This usually applies to major releases, however since AlmaLinux and Rocky Linux joined the RHEL rebuild the party in the middle of EL8.x, it also holds true for smaller releases.
AlmaLinux 8.3, which was released on March 26, 2021, was the first RHEL rebuild to get a GA release.

For RL 9.0, the entire Rocky Linux build system was replaced, which accounts for RL 9.0’s longer release cycle. Since Peridot is now in use, all future releases of Rocky Linux will be created using it. Because a quality release is more essential than being the first to release an asset, the Rocky Linux Release Engineering Team has pledged to only release assets after they have undergone testing and are prepared.

Update release lag is the second kind of release delay. This is the time interval between the release of a package update by Red Hat and the package update by the RHEL rebuild distribution. With so many updates to take into account, I’ll focus on just a few of the kernel updates to get an idea of the anticipated release lag. The file dates on my local mirror serve as the timestamps I am comparing.

With a normal lag of one day or less after Red Hat distributes the update for RHEL, the update release lag for both distributions has decreased significantly since the 8.4 release.

There are three large cloud providers that have official and 3rd party images available for both AlmaLinux and Rocky Linux. Let’s check the cloud provider marketplace image status.

If you consider to switch from CentOS 8 to AlmaLinux, you just need to follow the path below and then you’re all set.

Since Rocky Linux is still a fairly new operating system, occasionally you might run across bugs. On the Rocky Linux website, you can register for an account and submit bug reports using the Bugzilla server.

Which one is first to market?

In January 2021, AlmaLinux was made available, and Rocky Linux was released in February or March 2021. Although there isn't much of a difference, it influences people's choices, even though it shouldn't because the releases will be in beta and best practice says they shouldn't be used in production situations until they are consistently stable.

AlmaLinux vs Rocky Linux was discussed in this article. To go through the similarities and differences 10 various topics were explained to clarify the way each one goes to reach them. Generally, AlmaLinux and Rocky Linux are very similar to one another, however, they are managed and controlled very differently. If you have to choose an RHEL-based replacement, you are recommended to go with AlmaLinux because due to each distribution’s management and funding systems Alma is easier to be preferred. Also, you can consider that  AlmaLinux has been more responsive and has gotten updates out sooner.

For the final thoughts, we can say that they both are top-notch, so whichever you choose will be perfect, and eventually, if you changed your mind, switching from one to the other is simple.