How to Install and Setup UFW Firewall on Debian 11

Linux users commonly use firewalls to improve the security of their Linux system, as you know, firewalls control network connections and incoming and outgoing network traffic. To prevent unsafe and unwanted traffic to the network, users can set rules in the firewall to limit or allow specific traffic.

UFW, which stands for “Uncomplicated Firewall”, is a firewall software that runs on Linux to manage and monitor iptables and set rules in “iptables”. UFW is the best alternative to configure iptables, which have a relatively complicated syntax.

Among the best Linux firewalls, UFW is preferred by most Linux users due to its great role in improving Linux server and system security. Therefore, many users seek to install and configure UFW firewall on many Linux distributions.

The Debian operating system is one of the most popular and famous Linux distributions, and you are well aware of features of Debian; Due to the widespread use of Debian and the interest in using the UFW firewall on the Debian operating system, we decided to teach how to install and set up the UFW firewall on Debian 11 in this article. So stay with us until the end of the article.

To configure and run the UFW firewall in Debian 11, you need a Linux VPS running the Debian operating system; in addition, you must have sudo non-root user privileges to execute the instructions.

We start the steps of setting up the UFW firewall by updating the Debian repository:

After installing UFW, it is time to enable it, but before enabling UFW, you need to make some settings.

IPv4 and IPv6 are the main ports that must be enabled. Therefore, we must ensure that they are activated in UFW and check whether UFW supports IPv6 and IPv4 firewall rules or not.

Therefore, for configuration, you must open the UFW configuration file (/etc/default/ufw) using any editor or nano by running the following command:

Then search for IPv4 and IPv6 ports in the output and if you find that these two main ports are inactive, activate these two ports by changing their value to yes. 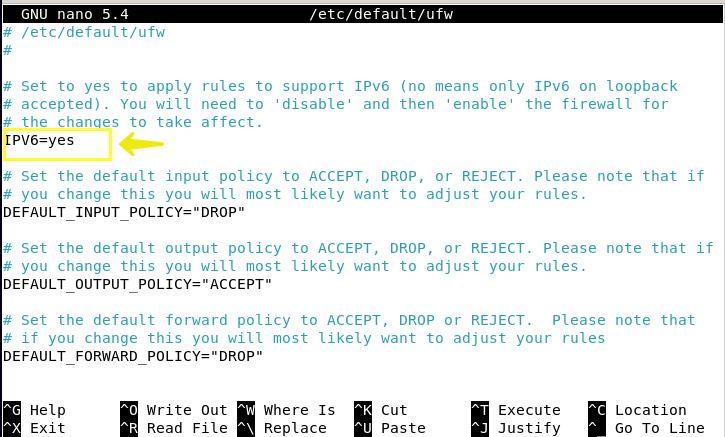 This step is optional, but by executing this step, UFW will be configured according to IPv4 and IPv6 port rules after activation. Before you enable the UFW firewall, it is better to have settings for connecting via SSH and default policies.

As you know, the firewall allows users to define certain rules, so you will be allowed to change the default policies of the firewall. The default policy of UFW is set in such a way that the incoming traffic is not allowed and the outgoing traffic is allowed, that is, it denies access to your server by others, but your server programs are allowed to connect to the outside world. To change the default UFW rules, the basic syntax is as follows:

To change the default rules, you need to go to /etc/default/ufw to access the UFW policies. As a result, if you want to prevent users from accessing your Debian server, enter the following command to deny incoming connections:

Defining these rules for firewalls running on the computer system may be sufficient, but in the server, access by external users cannot be defined as unauthorized. Therefore, we need to apply settings for a secure connection to the server in the UFW firewall, which we will explain in the next step.

Step 5: Allowing connection to the server via SSH in UFW

To enable the UFW firewall and respond to server requests from external users, we must allow SSH connection. Therefore, you must define rules to allow specific and legitimate incoming connections (such as SSH or HTTP) to the server.

You can allow incoming SSH connections to your server using the following command:

In this configuration, UFW defaults to SSH connection on port 22. But to configure the SSH daemon to use a different port, you need to open it in the UFW firewall.

For example, if you want to allow SSH connections on port 4444, you would run the following command:

As a result, you allowed SSH connections to your server in the firewall.

You can also use the following command to limit the SSH connection:

If you use a specific port instead of the default port, you must run the following command:

Before you try to enable UFW, it is better to check its status by entering the following command to make sure it is disabled.

UFW is disabled by default. Run the following command to enable UFW:

Note: Because you made settings to allow SSH connections in the previous step, you may encounter a warning after running the UFW firewall activation command. This warning is because UFW activation may cause SSH connections to be disrupted. To resolve this warning, you must answer the request with the Y button and then press the Enter button.

In the following, we will teach how to use UFW.

If you want to get more information about a specific program, run the following command:

If you want to allow HTTP connections on port 443, type the following command:

Firewall rules allow you to consider a range of ports for programs or any other service instead of a specific port and specify the port range in the UFW firewall.

For example, to set the range of 5000-5500 for X connection, use the following command:

Note that to set the rules on tcp or udp protocols, it is better to specify them because if they are not specified, both protocols are allowed by default.

You can also allow a specific port for a specific IP address. For this purpose, use the following command:

For example, if we want to allow the specific port 80 for the connections of the eth1 network interface, the following command should be executed:

In the creating of denying rules to block the addresses used in the specific port, use the following command as a template:

In the UFW firewall, it is possible to delete rules using the actual rule number and actual rule. To do this, first create a sub-list of UFW firewall rules by executing the command below to know the numbering of the rules:

If you want to remove the allowed HTTP rule through the rule itself, execute the following command:

You can also remove rule 443 through the actual rule:

You can use the UFW firewall without changes, for this purpose you must run the following command:

You can reset UFW by running the following command to configure new settings and rules in the firewall:

By executing the above command, all the rules you created except for the default rules and policies of the firewall will be deleted, and UFW will also be disabled, and then the UFW firewall will be ready to configure new rules.

You may not need UFW and want to disable it by running a command, so enter the following command:

By disabling the UFW firewall, all the rules you set will also be disabled.

To reactivate the UFW firewall, just run the following command:

UFW firewall offers users the possibility to set the access level. The user should choose the logging level according to his needs when logging in to the system based on the options provided by the firewall. The /var/log/ufw.log file contains UFW firewall entries in the default mode and low level, but if you need to enter with a higher level, you should select the High option. I will provide a guide to the options offered by the firewall in the UFW logging below:

Now that you are familiar with the firewall logging options, you need to run the following command to adjust the logging level according to your needs:

If you want to add a new rule in the firewall, such as SSH connections, use the following command to enable logging in to the UFW firewall:

The following command is also executed to disable the UFW Logging feature:

Installation and configuration of the GUI of UFW

Then search for firewall in the search bar.

By selecting the firewall icon, you will be asked to enter the root password. 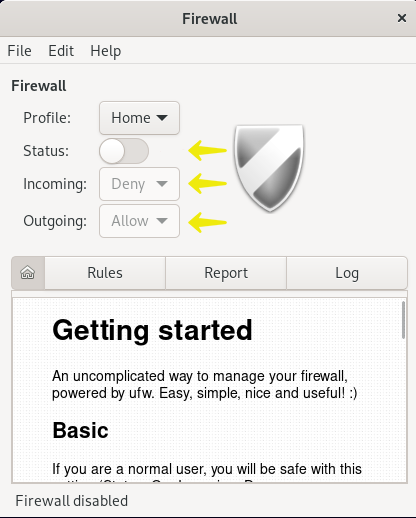 As you can see, the graphical interface of UFW easily provides the possibility of checking the status of the service, managing the incoming and outgoing traffic, as well as creating new rules(by selecting the + option). 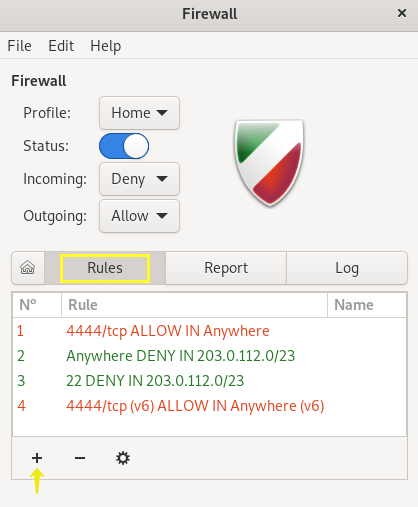 After applying the settings in the firewall rules, you will come across a new window for setting policies. 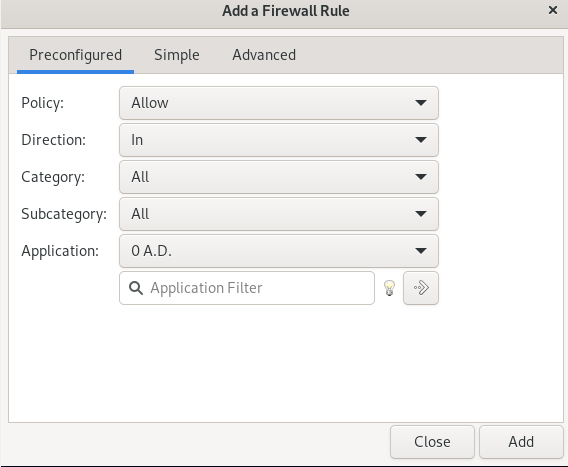 In the window that you see, in the preconfigured tab, by selecting the policy option, you can specify policies to limit, allow, and deny according to your wishes for incoming and outgoing traffic. 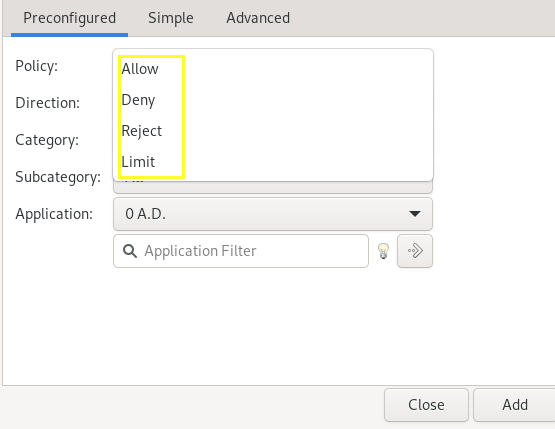 Category and subcategory options provide the desired factors so that you can easily apply your desired settings. 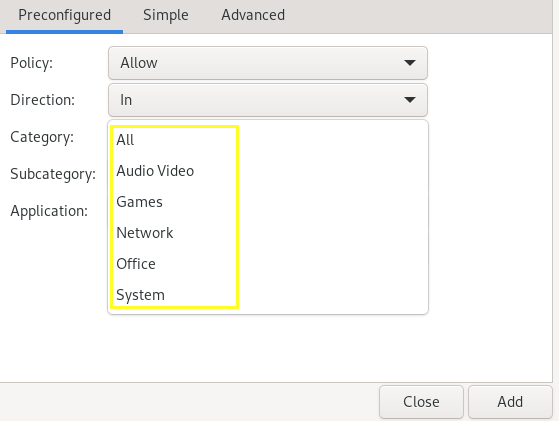 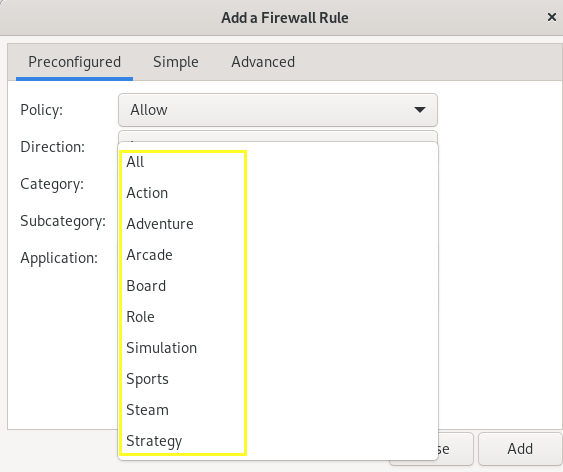 In the Add a Firewall Rule window, using the Simple tab, you can also set the type of policy, port number, and protocol, and after applying the settings, select the Add option to register the changes. 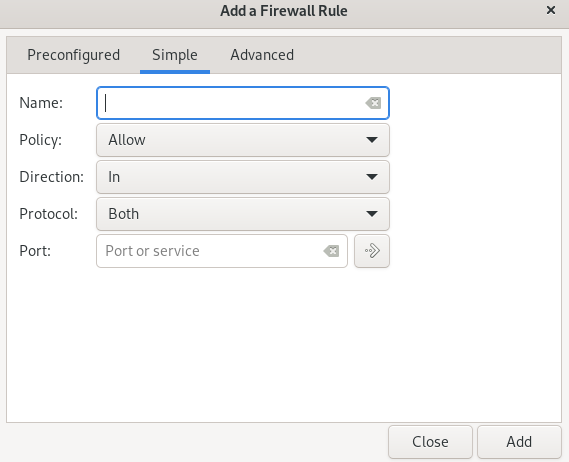 The Advanced tab is also for setting a new rule for a specific range. 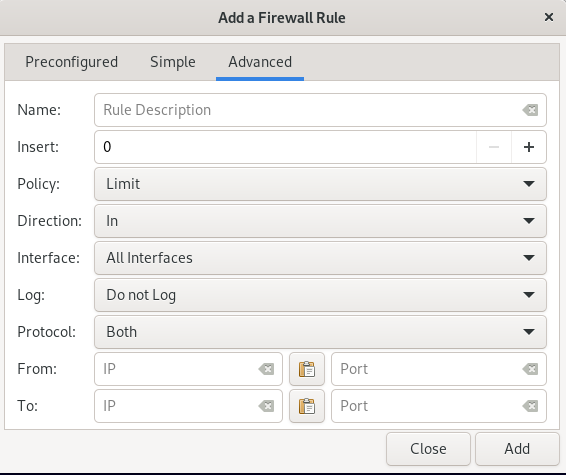 Is the UFW firewall also ideal for increasing server security?

UFW is a powerful firewall to improve the security of the Linux system, especially the Linux server, because it provides a framework for monitoring and checking Netfilter and mostly deals with iptables. UFW is used as a front-end to manage firewall rules commonly on the server.

When the UFW firewall is enabled, all external access to the network and ports of your server are blocked by default, unless you have set rules for certain incoming connections in UFW.

How to find out if UFW is activated?

You can check the status of the UFW service by running the following command:

If you see the status: active in the output, it means that UFW is activated, but if you see inactive, you must activate it by running the following command:

Ensuring the security of the system network is the most important task of the Linux server and system administrators so that they can protect important data and the local network against hacking and cyber-attacks. Using the UFW firewall is one of the most common and efficient ways to improve Linux server security. By using UFW firewall capabilities, you can set limits for incoming and outgoing network traffic and prevent unauthorized and unwanted incoming connections, thereby improving the performance and security of your Linux server.

In this article, we taught how to install and configure UFW in Debian 11, as well as how to use UFW. We hope that by using our tutorial, you can use UFW usefully and strengthen the security of your Linux system.

If you encounter a problem in any part of this article, let us know in the comments section so that we can respond as soon as possible.

Thank you for choosing our article to read.