The story of Mikrotik begins with its establishment in 1995 in Latvia that manufactures network devices (hardware and software), first started its activity by selling wireless routers, and one of the goals of this company was to compete with Cisco (manufacturer of cisco switches). MikroTik introduced MikroTik RouterOS, which is an operating system based on Linux, as the main product of MikroTik company, following the development of its activities.

Everything about MikroTik RouterOS

One of the important features of the Mikrotik operating system is its simplicity in configuration and use. Winbox software is one of the applications that facilitate the use of Mikrotik, which provides a user-friendly graphical interface for configuring the router and monitoring its operation.

Mikrotik supports various configuration methods such as secure Telnet and SSH and FTP access over the network, direct keyboard and monitors access to Application Programming Interface (API), and MAC-based connections with the Mac-Telnet tool, but the advantages of this Powerful operating system are not limited to these factors.

MikroTik Routers OS has better performance in virtual services and is more successful in this field, that’s why MikroTik servers are the best and most widely used services with the features it offers. Most network professionals choose Mikrotik servers to meet their router or firewall needs.

Mikrotik runs as a high-speed and powerful router with automatic operation without any need to log in or start any type of service. Usually, the main purpose of using the MikroTik server as a router is, in addition, the stability of the MikroTik servers is another reason to attract users and network specialists to the MikroTik server. As we explained earlier in this section, access to the Mikrotik server can be configured through Telnet and SSH, an internal Web server, and Winbox in addition to local access.

Another feature of the Mikrotik server is the flexibility, ease of setting, and speed of its installation and configuration, even you can import and export in its settings. The point that you should pay attention to is that to improve the performance of the Mikrotik operating system, you will have to get a license for each feature, but in any case, it is a reasonable and affordable option compared to similar examples and its competitor (Cisco).

The efficiency of the Mikrotik server increases its popularity day by day. The most important reason for buying a Mikrotik virtual server is to use it as a router, but some organizations and companies choose a Mikrotik server in order to increase security as a firewall to increase network security or to set up a virtual private network. Many people also intend to establish a secure connection between two locations in their work group or implement a tunneling system by purchasing a Mikrotik virtual server.

Mikrotik server offers unique applications that cannot be found in other operating systems. In addition to the uses we mentioned, by using Mikrotik VPS, you can identify the IPs that intend to attack your VPS and limit, route the network for troubleshooting, connect one server to another server, create a load balance, transfer information through the MikrotikVPS in the network, also use Torch tools to manage network connections and traceroot tools for troubleshooting Use network discovery. In the following, we will explain more about the use of Mikrotik VPS so that you understand the reason for the popularity and widespread use of Mikrotik VPS. 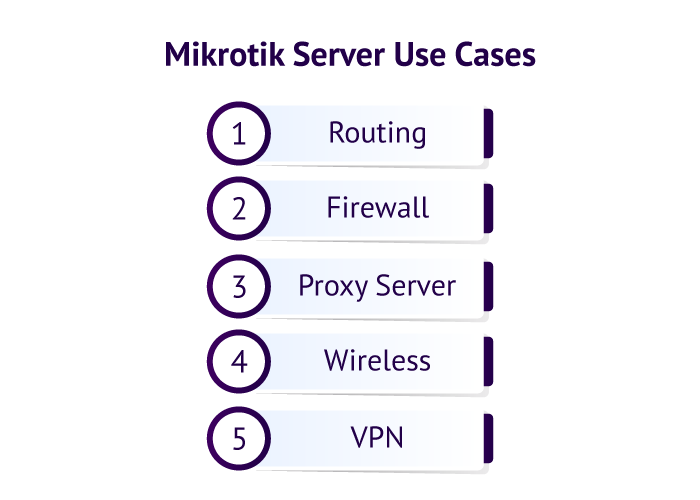 The router is one of the commendable and extremely powerful capabilities of Mikrotik VPS in the network. The router is a process that is used to select the most suitable path in external and internal networks, which plays a very important role in data transmission in a network.

One of the important uses of Mikrotik VPS is to use it as a router. Communication between network offices and branches is an important issue that is provided by the Mikrotik server. If you have one or several offices, dividing a network into several networks is a requirement that many users are looking for the easiest solution to solve.

In addition to being an efficient solution for separating the network into several networks, the Mikrotik server offers the possibility of setting up a VPN for secure communication between branches. It also provides the possibility of applying access restrictions in the use of available resources between branches, such as file sharing, printers, programs, and cameras.

Another use case of Mikrotik VPS is its security and communication applications. A firewall is one of the main protective parts of the network that prevents unauthorized access to a computer system or network and can limit the sending or receiving of certain information.

The meaning of protection against unauthorized access is that Mikrotik Firewall provides the ability to monitor the connections to the specific address of the router and allows only certain hosts to access TCP ports. Through Firewall, you can control all internet data and prevent unauthorized intrusion by setting specific rules. Therefore, Mikrotik server protection allows you to prevent clients’ hosting from malicious attacks.

In the Mikrotik server, the firewall plays important roles such as filtering, internal connection, routing, packet marking, blacklisting, identifying the source and destination, supporting IPv6, and bypassing information tracking (RAW), in addition to the possibility of limiting incoming ports and Network output. Limiting and changing important ports such as remote desktop ports and other commonly used network ports is effective in controlling and limiting external communications. For example, when you publish a camera on the network, by changing its port, you can easily check the status of your cameras via mobile and by connecting to the Internet.

Also, users can communicate with network resources such as cameras, file servers, printers, programs within the network, etc. through the Internet. 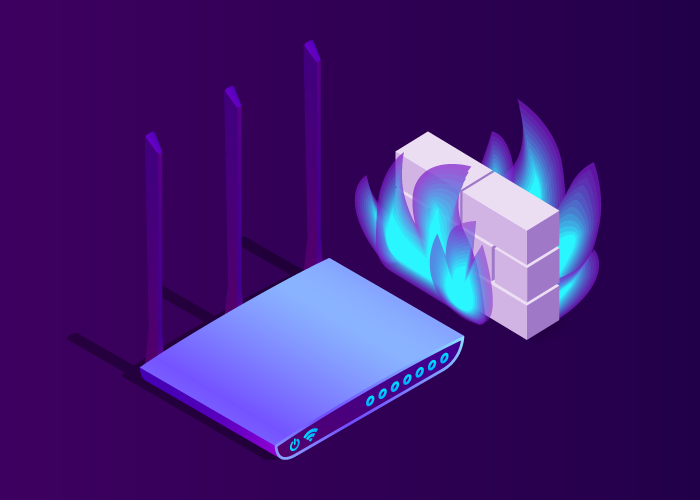 The role of the Mikrotik Firewall is more important in establishing a secure connection because it can keep the connections from private addresses hidden. It also monitors all client network connections and provides detailed statistics and reports on the traffic of all links. Mikrotik Firewall also offers the possibility of traffic prioritization and to ensure more important connections, marks the packets that have priority. As a result of this work, a controllable flow is provided in the network, which prevents the lack of bandwidth.

Therefore, network managers who are responsible for controlling and managing user consumption and dividing the use of each system or user, can use Mikrotik VPS facilities and professional settings to Separate and manage a group of users, IP range, etc. based on the destination, source, program type, port, etc.

Mikrotik Server provides the possibility of implementing and setting up a Proxy Server. A proxy server acts as an interface between the user inside the network and the Internet. The proxy server offers advantages such as providing security, storage services, management monitoring, and controlling users in the network.

The websites visited by users are stored in the cache of the proxy server and when another user requests to access the pages of the most visited websites, the desired page is presented to the user quickly. As a result, the Proxy server is effective in increasing the speed of responding to users and reducing your internet consumption.

Also, due to the role of the router interface, in this case, you can prepare more complete reports and apply more serious restrictions on how to access sites. In addition to the things we have explained, Setting up a Proxy server makes Mikrotik VPS benefit from features such as a storage list, support for storage in a separate drive, an access control list, SOCKS protocol support, an HTTP cache, and a DNS proxy server.

Therefore, the possibility of setting up a proxy server will provide you with useful advantages, which is possible thanks to the Mikrotik server.

To be able to transfer your data in a secure platform and a private network, there are various methods, of which the use of a wireless radio platform is one of the most important and common methods. In this method, radio waves are used to transfer data between two or more points. In addition to special wireless routers, several Mikrotik routers also have wireless technology and the possibility of connecting your wireless devices without the need for an Access Point is provided.

The possibility of setting up a VPN or Virtual Private Network in Mikrotik VPS is another feature of Mikrotik that establishes a secure connection with encryption and authentication when accessing the Internet or other computers.

Setting up a VPN has become an important need for most businesses with the advancement of technology, especially companies that communicate remotely between branches. We have already talked in detail about what a VPN is and its features, but in this section, we also want to briefly remind you of the features of setting up a VPN server:

What are the uses of Mikrotik VPS?

In general, Mikrotik can be used in the following cases

And hundreds of other things...

For users who do not have enough expertise in server management, Opera VPS specialists take over the tasks of setting up the desired operating system, software, scripts, and control panels. You only need to select and order these items when purchasing the server. So Opera VPS also offers Mikrotik VPS with different plans.

What are the important points to pay attention to before buying Mikrotik VPS?

Mikrotik VPS has different applications; Routing, Firewall, wireless client, proxy server, VPN private network, network address translation, user management, dynamic host configuration protocol, MPLS, Load balancing, Quality of service, connection hosting, Packet Compression, backup and recovery, authentication Identity and… is one of the most common uses of Mikrotik VPS. You can even monitor your internet usage in real-time through Mikrotik and apply the necessary restrictions if needed. Mikrotik also has an IP distribution system, or DHCP, and can assign the desired IP to the users who are connected with it.

Mikrotik VPS can solve many needs by providing great features and capabilities, while other operating systems may not be able to perform some tasks as well as Mikrotik.

Mikrotik server use cases can guide you in choosing your ideal server because the performance of the server for your purpose and needs will make you decide between different types of servers. If only one of the things we mentioned is your goal, choosing Mikrotik VPS is a smart choice.

We hope that you are well acquainted with Mikrotik server Use cases and can make the right choice according to your needs.

Thank you for choosing our article to read.