What is Debian OS?

Debian operating system, also known as Debian GNU / Linux, is one of the most stable Linux distributions available for free. Debian was first introduced on August 16, 1993, by Ian Murdock; This distribution has been published by many programmers to produce a non-commercial version. In the following, we will talk Completely about this powerful Linux distribution and introduce you to the features, evolution, types of Debian versions, and what Debian is.

Debian is one of the oldest Linux distributions in the world of open-source software, which is voluntarily developed and supported by a large community of programmers. Like RHEL, this product is a parent distribution, and many operating systems such as Ubuntu, Linux Mint, Kali Linux, Tanglu, Knoppix, and SolydXK have been developed based on it, which changing the source code and applying changes to it, more than 120 new distributions have been published so far; This indicates the high power of this operating system.

Debian distributions are also widely used in servers and desktops; This distribution emphasizes stability, and the largest and most comprehensive software source belongs to this family. Debian is one of the oldest Linux systems, which has been named one of the best choices of 2018 due to its high stability.

This Linux distribution is licensed under the GNU / GPL and is a Unix-like operating system with a repository of thousands of free software; One of the best features of Debian is the package management system, which provides the system administrator with excellent facilities in the field of updating, package management, and installation; The Debian project also commits itself to publish detailed updates on operating system security issues in addition to publishing security updates.

Debian is offered in three main channels, test(developing), stable and unstable; Stable channels have the highest security and lowest bugs possible and have regular updates.

Debian is a user-friendly distribution that, although more advanced than other distributions such as Ubuntu, ChaletOS, and Manjaro, is easier to work with than a distribution such as Gentoo.

Let us also mention a subtle point that the Debian 10 update is popularly known as Debian Buster; Note, however, that Debian 10.5 is not a new version of Debian Buster and is only a Buster update to which the latest software updates and applications have been added, as well as security fixes; This has the advantage that if you use the Buster system, you do not need to get rid of it; You can upgrade the system using APT Package Manager.

Debian is offered in three main channels, test(developing), stable and unstable; Stable channels have the highest security and lowest bugs possible and have regular updates.

Debian is a user-friendly distribution that, although more advanced than other distributions such as Ubuntu, ChaletOS, and Manjaro, is easier to work with than a distribution such as Gentoo.

Let us also mention a subtle point that the Debian 10 update is popularly known as Debian Buster; Note, however, that Debian 10.5 is not a new version of Debian Buster and is only a Buster update to which the latest software updates and applications have been added, as well as security fixes; This has the advantage that if you use the Buster system, you do not need to get rid of it; You can upgrade the system using APT Package Manager, Advanced Package Tool or APT, which are introduced as software packages for Debian operating system and are provided using DEB packages.

Of course now Version 11, codenamed bullseye, is the most recent Debian release that can be considered stable. The first version 11.0 was published on August 14, 2021, and the most latest upgrade, version 11.3, was released on March 26, 2022.

In 1993, on August 16, debian Linux was first introduced to the public by Ian Murdock; Linux distribution was a new concept at the time, and the goal of developing a Debian distribution was to be non-commercial, free, and in line with the principles of the GNU and Linux projects; As a result, the project was financially supported for one year (November 1994 to 1995) by the Free Software Foundation; At first, many people thought that the Debian project that was presented by several programmers; It has no destiny but to disintegrate and it fails.

It is interesting to know that the Debian developer group created this distribution without any financial idea and it was voluntarily, and in their spare time, they developed this distribution and did not receive any money for it; So many people expected the project to fail, but contrary to popular belief, it turned out differently; In addition, Debian survived, it developed , and in less than 10 years, this distribution became known as the most unique Linux distribution in the world, and so far more than 120 distributions based on it have been released, and there are more than 50,000 software packages for debian. It is even designed for 8-processor architectures and supports a variety of system and PC architectures.

Under these circumstances, the founder of the free software movement named Richard Stallman, due to disagreeing with some of Debian’s explanations, designed software called Virtual Richard M. Stallman. This software was responsible for reviewing the packages installed in the Debian distribution and reporting software that is not free.

One of the applications of Debian is that it can be installed and run on most processors with different architectures of 32-bit and 64-bit versions of Intel, AMD, ARM, and mainframe eServer computers from the IBM z series.

The last thing that can be mentioned; is Debian’s powerful graphical environment is a convenient command line terminal and an attractive environment for the user.

Open source: being open source is an advantage that users can apply any changes to the operating system.

Strong support: Debian is not just a Linux operating system; This software is produced by hundreds of volunteers worldwide. You can still be part of the Debian community even if you are not a programmer.

Debian is based on community and consensus. Due to the wide range of Ubuntu users, Debian has become a common practice in Linux software. Of course, we did not mean that Debian files run only on Ubuntu, but also they run on Debian, and they are compatible with both systems; You can find all kinds of software you need in Debian.

Durable: As we mentioned, the release of new versions of Debian takes 2 to 3 years, which means that there is enough time to check and fix all possible bugs and security problems, and if necessary, it publishes security updates for the stable version. Of course, no new features and capabilities will be added to the operating system and will only be upgraded in terms of security; As a result, you can use the latest version of this operating system for a long time, which is important in the field of servers because server administrators no longer need to take steps to upgrade the operating system in a short time. 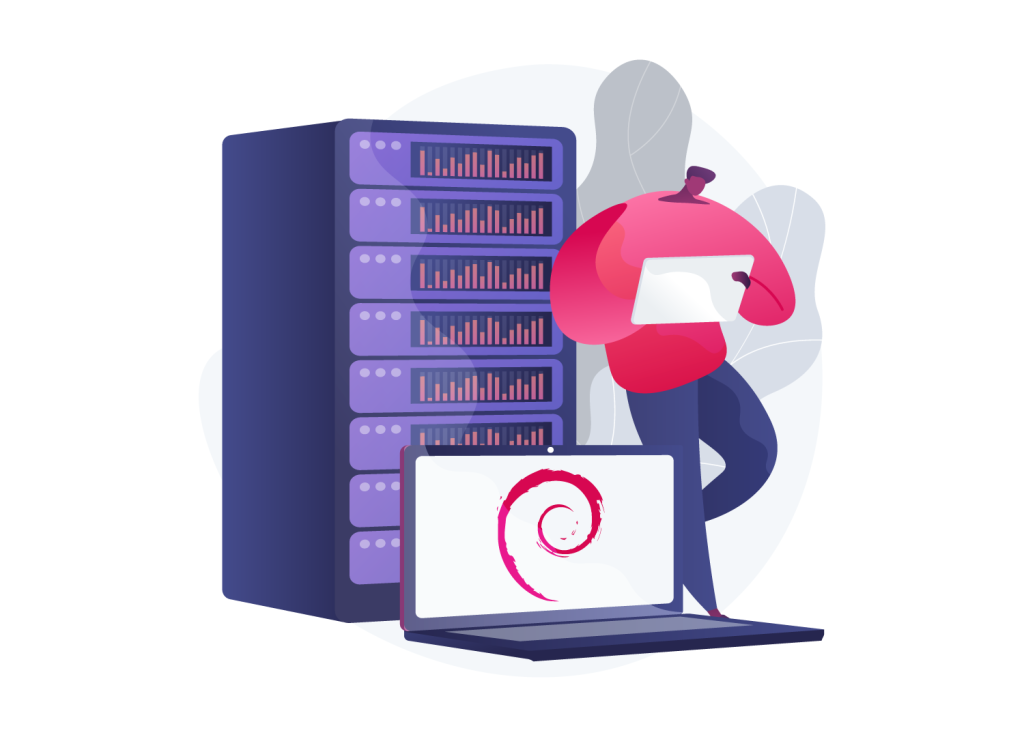 Debian despite its advantages and features, The complex and time-consuming process of its development and testing created problems; These problems were due to delays in updating Stable versions, which are usually Debian Stable versions provided every 1 to 3 years. This caused users to use test versions until the bug-free version was released, and the same was true for software packages. Also until a new version is released, The software version belongs to 6-7 months ago. Another disadvantage of Debian is that it does not support Delta updates such as Delta RPM.

Debian has been introduced in 3 versions, which we will explain in the following.

The stable version is the latest official version of this system, which in addition to high security, has high stability and is very useful in operating spaces. Still, this version has the disadvantage that it is not compatible with new software because the release process of the new version is 1 to 3 It takes years if you are looking for a version that constantly offers the latest and greatest software packages; The stable version will disappoint you in this regard.

This version is expanding its software packages and is waiting in line for stability; The Testing version is for error testing, which provides the latest software enhancements for testing. Also, the Testing version has more updates compared to the stable version, but its disadvantage is that it can not receive security packages at the right time; The latest beta version of Debian is the bullseye.

as you get to know with Debian operating system, it is better to know its important features.

On what cores, is Debian currently being released?

What are the main reasons for using Debian?

Debian is a secure and stable Linux-based operating system that Debian developers provide security updates for all packages whenever possible, and it is an entirely free and open-source operating system; Use, change, and distribution of Debian is free for everyone.
Debian is known for its easy and smooth upgrades in the release cycle and is the foundation of other distributions like Ubuntu; It also supports most hardware.
Debian has a large community that volunteers worldwide to develop and solve its problems. Debian can also be installed live and can be installed using a CD-ROM, USB, or even an automatic network installation tool. Debian performs well in professional environments with its reliability, high security, and long-term support through specialists.

What are the different distributions based on Debian?

Many of the most popular Linux distributions, such as Ubuntu, Knoppix, PureOS, SteamOS, Tails, Openbox, SolydXK, and Tanglu choose Debian as the basis for their software.

Can we use Debian OS for server?

Yes, Debian OS is one of the most popular operating systems used on the server; Of course, note that the server version and the desktop version are different, and you must use the Debian Linux server version.

Debian is one of the oldest and most widely used free Linux distributions, from which many other Linux distributions are derived; This operating system can be viewed on servers and PCs, Specially the most used of this distribution is the Linux VPS. Many people choose Linux VPS for their important operational activities due to the excellent performance of this operating system and Linux VPS use cases. Debian has allowed programmers to make changes to the source of a Linux distribution and play a role in providing a new version. The Important features of this version of Linux that We can mention are stability, excellent quality control, Including more than 20,000 software packages, and architecture support for more processors than other Linux distributions. Debian is a perfect choice for novice to professional Linux users.

Thank you for being so supportive.

What is SoftEther VPN Protocol?

VDS vs VPS: Differences between VDS and VPS